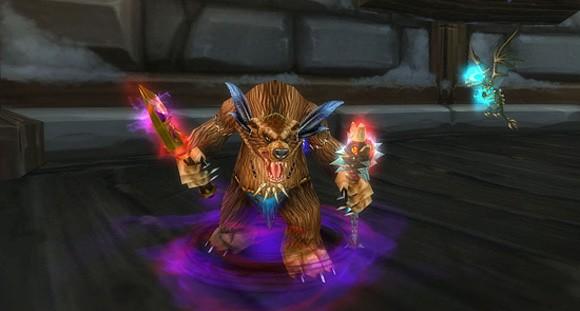 My first reaction to seeing the new, streamlined talent trees was, "We'll all be cookie cutter specs now!" I mulled it over for a bit, hashed it out with some people on Twitter and came to the conclusion that the new streamlined specs are a good thing, in principle. Ask yourself, when was the last time you respecced to move one to two points around? How much are you really losing with the slimmed-down trees?

My shaman, Stoneybaby, hasn't respecced in ... I don't even know when, but I'm sure it's been many months. I have my raiding spec, in which I could move one or two points around -- should I take 2/3 Improved Shields or 3/3 Improved Shields? Ultimately, it makes little difference; I picked my raiding spec and my PvP spec, and I go forth with those until the game requires a change. I don't need a lot of choice because I won't use it.

On the other hand, my druid is a bit different. He's specced balance for AoE farming Chunk o' Mammoth (my wolves need their Spiced Mammoth Treats!) and feral bear for tanking alt raids. For raids, I either tank or I tank -- take your pick. He's mostly useless as DPS in raids because he doesn't have the proper hit, mana regen or focused damage talents; he's built to kill a dozen mobs at once out in the field. I like the choice so I can specialize in AoE farming.

In the case of my shaman, I really don't need that one- or two-point customization, and so lamenting the loss of deep, complex talent trees is just the loss of choice for the sake of choice. For my druid, I really do want and use the complexity of the current specs. Overall though, I think the slimmed-down trees will enrich the game without dumbing it down.

What about you? Do you really want deep choice in spec customization, or are you just lamenting the loss of the illusion of choice?

World of Warcraft: Cataclysm will destroy Azeroth as we know it. Nothing will be the same. In WoW.com's Guide to Cataclysm, you can find out everything you need to know about WoW's third expansion. From goblins and worgens to mastery and guild changes, it's all there for your cataclysmic enjoyment.
In this article: 31-point, 31-pt, cata-beta, cataclysm, cataclysm-news, cataclysm-wow, facebookfeed, game-discussion, gamer-discussion, spec, specs, talent, talent spec, talent-trees, talents, TalentSpec, world-of-warcraft-discussion, world-of-warcraft-topics, wow-discussion, wow-hot-topics, wow-issues, wow-topics
All products recommended by Engadget are selected by our editorial team, independent of our parent company. Some of our stories include affiliate links. If you buy something through one of these links, we may earn an affiliate commission.
Share
Tweet
Share