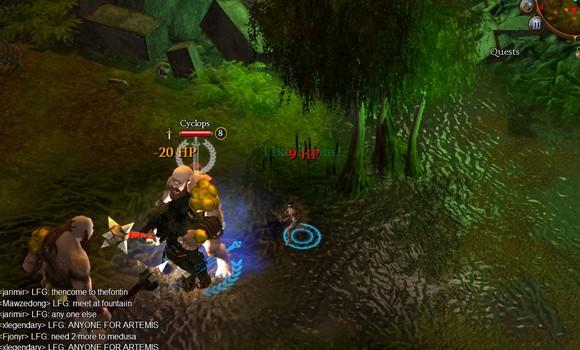 Each week Rise and Shiny asks you to download and try a different free-to-play, indie or unusual game, chosen by me, Beau Hindman. Some of the games will be far out of your gaming comfort zone, and some will pleasantly surprise you. We will meet each Tuesday and Friday night at 9 p.m. EDT (8 p.m. CDT time) followed by this column the Sunday after. I welcome any suggestions for games, either in the comments or at beau@massively.com.

I'm a simple man. I need a strong cup of coffee in the morning, walks with my two dogs, a kiss from my wife -- and giants. Lots of giants. Mytheon is a perfect game for a simple man like me. It installs easily and the controls are basic. It is by no means perfect, but I am not sure that it is trying to be. Like me, it's simple. It wants you to control miniature armies of centaurs, cyclopses and skeletons, and it wants you to kill things while controlling that army.

Well, I will admit that it is never that simple, especially within the sphere of gaming. Like in most simple-to-play-yet-tough-to-master games, a good deal of the depth comes from the planning and organizing of the mini-army. After all, do you want to go for high damage output or would you prefer to go for defensive ability? Personally, I had to decide whether I wanted more skeletons or minotaurs only, and really gave no thought to any such math.

Once you have your army organized in the form of "stones" that rest in a pseudo-card deck, you can click on certain level-specific areas on your map to explore -- essentially Guild Wars - style instances that can be replayed over and over. As you kill monsters and conquer Medusa and other fabled creatures, you achieve goals and titles and can respawn or return as much as you need to get the job done. While visiting a new zone is fun for the first or even third times, having nowhere to go until hitting the next level (and gaining access to a new zone) can definitely be tiring.

In example, Bran Flakes (a reader who is the most loyal of Shinies) and I were in a level 5 through 8 zone populated and themed after Athena. A new player logged into the game and asked to join us, but his level prevented him from doing so. While we could have joined him in the lower-level instance, we were near the end of the adventure in the Athena zone and did not want to give up. After all was done, we did not get to spend time with the new player.

And yes, there are bugs and odd little glitches, but I promised not to make any mountains out of molehills, namely because those molehills are in beta right now. Even then, the game generally runs very smooth and looks great. Controls are odd, though, and my poor wrists suffered because of some of the click-to-move weirdness; I was wishing for a camera that actually followed behind the avatar. Still, the game is so straightforward that I will bet that a brand-new gamer could probably steer her mob to success relatively easily. Mytheon is deceptive that way, making you think that there is no challenge or depth. Yes, the lore is presented through silly glowing books that are peppered around the world, and it is hard to take the game too seriously with its repeatable dungeons, but the real chin-scratching comes when you are faced with an enemy that just won't die.

Do you go for a balanced group of minions, or do you favor damage-over-time abilities? Some players prefer to rarely use their pocket-monsters, preferring instead to save the big guns for the big battles. I went for the "click on a bunch of buttons" method, and found that strategy was best learned through failure.

There is a nice cash shop included in the world, and prices seemed relatively cheap. I spent a bit on ordinary batches of stones that usually held one or a few rares, but overall I didn't seem to need anything more than what I already had. Of course, further down the road there might be a need to spend handfuls of cash, something I did not experience yet.

I also didn't experience crafting, which I regret. It seems like a nice system, but honestly I was too busy stomping around with giants to bother. In fact, I really didn't find the need to keep up with stats or equipment, and the lack of challenge was a little surprising. I will wager that many players burn through a good deal of this content and are forced to spend a lot more of their elder levels in crafting, repeating instanced areas, in PvP or tweaking stone decks. While this might be frustrating to some players, I am not so sure that Mytheon is trying to be more complicated than just a fun game of "army men." Either way, it's worth a look. I have a feeling that the "beta" status might continue for a while, but don't let that stop you from stomping around with giants. Will it stay on my hard drive? It sure will.

I am very excited to say that next week we will be looking at Istaria, the Game That Wouldn't Die. Strangely enough, I was already thinking of looking at it again when I was contacted by one of the developers of the game. I have been provided a nice press account with high-level and low-level characters, and while I am grateful for the opportunity, I am really enjoying the brand-new human character on my "normal" account the most. We will meet up and see what we think of this oldie-but-goodie. I am on the Chaos server under the name of Beaugh Hindman.

Now go log in!
In this article: army-men, athena, beau-hindman, beta, bran-flakes, cash-shop, crafting, f2p, featured, free-to-play, ftp, Giants, Medusa, movie, mytheon, mythology, petroglyph, pocket-monsters, rise-and-shiny, stomping-around-with-giants, trailer, video
All products recommended by Engadget are selected by our editorial team, independent of our parent company. Some of our stories include affiliate links. If you buy something through one of these links, we may earn an affiliate commission.
Share
Tweet
Share