Meet Grasp, a wearable that helps instructors micromanage you 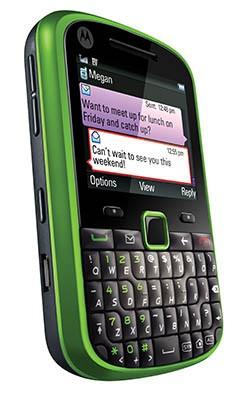 It may not be the EX112 / EX115 they seem to be getting down in Brazil, but the Motorola Grasp isn't far off, proving that Motorola's still committed to delivering non-Android phones in market segments where... well, Android might kinda be overkill. The CDMA / EV-DO phone is capable of operating both on 800 / 1900MHz and on AWS bands, meaning we wouldn't be surprised to see it land on regionals like MetroPCS where AWS has started to play a prominent role. It's got a 1.3 megapixel cam, 3.5mm headphone jack, AGPS, stereo Bluetooth, microSD expansion to 8GB, and -- something Moto has been playing up since the Renew -- an eco-friendly design with a completely recyclable shell when you've finished texting on that QWERTY keypad for the last time. Look for it to launch this quarter.
In this article: grasp, mobile, moto, motorola, qwerty
All products recommended by Engadget are selected by our editorial team, independent of our parent company. Some of our stories include affiliate links. If you buy something through one of these links, we may earn an affiliate commission.
Share
Tweet
Share