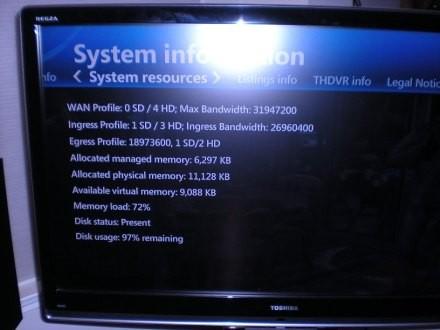 Judging by its own report, AT&T is proud to have grown U-Verse to 2.5 million TV customers while adding features like My Multiview, which lets users plug in four channels of their choice to watch at once, and the new Chicago Cubs branded Multiview app that enables local fans to view the main broadcast plus three of any six additional camera angles on one screen. But one of the biggest recent additions wasn't mentioned in these press releases, as it's quietly strengthened one of the weaknesses we've complained about most, increasing from two simultaneous HD streams per household to 3 (or 4, as pictured above by U-VerseUsers forum poster txskeets.) VP Jeff Weber tells us the upgrade covers the overwhelming majority of users, so watching ESPN in one room, Shark Week in another and DVRing iCarly all in high definition should be no problem now. We're still waiting to hear specifics about Xbox 360 and Windows Media Center tie-ins, but we'll make do with this item being checked off of the list for now.

In this article: att, channels, dsl, hd, hd streams, HdStreams, iptv, mediaroom, multiview, simultaneous, u-verse
All products recommended by Engadget are selected by our editorial team, independent of our parent company. Some of our stories include affiliate links. If you buy something through one of these links, we may earn an affiliate commission.
Share
Tweet
Share