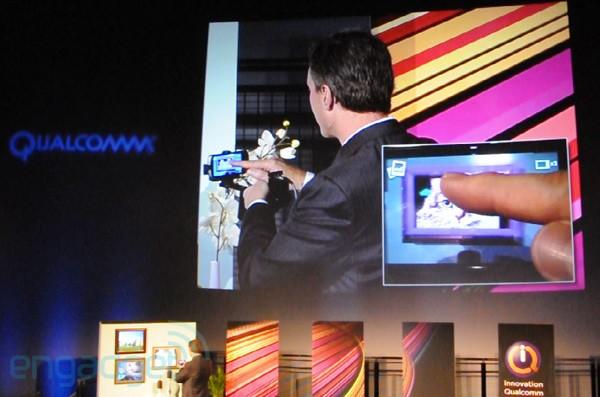 Want a glimpse of the future? How about one from Qualcomm CEO Paul Jacobs? What he demoed in London just now was a groovy concept that combines his company's two service technologies: augmented reality and peer-to-peer. The idea is that you want to upload an image from your phone to one of your many wireless photo frames (actually WiFi-connected PCs in disguise here), but rather than having to pick your desired frame from an eye-dazzling list of WiFi SSIDs, you can just use this augmented reality app -- developed using Qualcomm's very own AR SDK, naturally -- to point at the frame and shoot the file over. Pretty rad, huh? But we picked out one flaw: currently, the app identifies each frame by remembering its previously uploaded image, so if two or more of these frames display the same image, the app would get confused. This can of course be fixed by simply adding a QR code onto the actual frame. Anyhow, you can see this demo in action after the break.