S. Hollister
October 21st, 2010
In this article: 2.4GHz, cyborg rat, cyborg rat 9, CyborgRat, CyborgRat9, exclusive, gaming mouse, GamingMouse, Mad Catz, MadCatz, mice, mouse, rat 9, Rat9, review, wireless, wireless gaming mouse, wireless mouse, WirelessGamingMouse, WirelessMouse
In a world full of the shapely blobs we call computer mice, the Cyborg Rat stands out. It's skeletal, metallic, and almost completely asymmetrical. Though most mice are one-size-fit-few, the Rat lets you transform the hardware itself to fit the shape of your hand. It's got two scroll wheels and a special button that lowers DPI while it's held -- and this new Rat 9, due out November, is completely wireless as well. Whereas Razer, Microsoft and Logitech all built their premium wireless gaming mice from scratch -- and with cord-based charging in mind -- the Rat 9 instead integrates a hot-swappable battery pack and a 2.4GHz radio into the same modular design. Is it a half-baked attempt at wireless bliss, or do we have a new king of mice? Find out after the break in our full review. %Gallery-105601%
Mad Catz 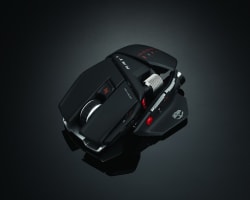 
In case we hadn't already established that it's a looker, let's say it once and for all right now: the Rat 9 is one sexy mouse. Dressed completely in deathly black with sharp angles and rakish curves throughout, it evokes a Skunk Works stealth plane but with metallic components jutting out -- he better to show you precisely where you can tinker with the mouse. Out of the box, it's a modest, narrow peripheral suited for small hands or a fingertip grip style, but you can transform it into a wide, elongated device in under a minute flat -- just unscrew the integrated hex key at the back of the unit and you can adjust the thumb rest's angle and length; replace the pinky rest or palm rest with two alternatives (each); and / or extend the palm wrist with the push of a button to support larger hands. Since the thumb and palm grips do interlock to some degree, not all combinations work as you might expect, but we quickly found a style we liked and only our curiosity and some rough edges (more on that later) kept us fiddling with the settings. Though the Rat 9's metal frame and newly-added lithium-ion battery packs make the mouse fairly hefty to begin with, there's also an weight cartridge on the underside of the mouse, and while it's not as accessible as some of its contemporaries (you have to unscrew the hex key and a retaining nut) you can easily add 42 grams to the device in 6-gram increments.

Mice live and die by the placement of their buttons and the comfort of their grip, and adjusted properly the Rat 9 is fairly superb on both fronts. While both the left and right mouse buttons do require a solid press, they're large and responsive all the way up to the apex of the mouse, and there's actually only a single spot (on the extreme upper-right-hand corner of the right mouse button) where it won't actuate if pressed down. The main control surface is wide enough, in fact, that we could comfortably put three fingers on the top of the mouse, using the middle to control the mouse wheel and DPI sensitivity adjustment rocker (a nice touch in and of itself) without ever moving our index and ring finger from the all-important trigger buttons. The thumb grip's pair of programmable rockers similarly won our favor because of their ridges up top -- like the thumb keys on Logitech's G700, we could press these just by slightly shifting the base of our thumb, leaving our thumbtip free to hold the red sniper button -- a feature we'll talk about later. We never really found ourselves using the thumb wheel in our first-person shooters, but you can think of it as a two-way rotating programmable button if you will, and it spins in small enough increments to find use as a weapon or ability switcher.

As far as comfort is concerned, chew on this -- out of the box, the Rat 9's completely coated in soft-touch plastic, and if you don't like that, you can swap for a pair of textured rubber palm and pinky grips instead. There's also a taller soft-touch palm grip for claw-style gamers to better align their wrists. All of this makes for some fairly comfortable mousing options, but as with most one-size-fit-all products (also see: baseball caps) you may not find an exact match. We tend to grip mice between the base of our thumb and pinky, but the Rat 9 isn't well designed for that -- we ended up pinching our skin in one of the mouse's seams where no amount of soft-touch plastic could save us from chafing on those delightfully rakish edges, something that could perhaps have been avoided with a little rubber instead.

We alluded to it somewhat at the beginning of this review, but the Rat 9's not like any other wireless mouse we've seen. It doesn't use a USB dongle and standard batteries, nor a removable play-and-charge cord. Instead, you socket one of two hot-swappable lithium-ion battery cartridges into the back of the mouse, and put the second in a charging station that doubles as the 2.4GHz wireless transmitter and holds additional weights for the Rat as well. This means you're always relying on wireless connectivity (more on that in a sec) but also that you've always got a battery ready to go, and it's admittedly pretty neat to rip out that battery (like a clip from a gun) and slide a fresh one in. Sadly, there's no gun-like eject lever for the lithium-ion cell, as it's fairly hard to grip; we often found ourselves having to remove the palm rest in order to get a better purchase on the little cartridge when it was time to switch.

The Rat 9 uses the same 5600dpi sensor as the Rat 7, and it's as accurate as we could hope to test without being pro gamers ourselves. We certainly found we pulled off more crazy headshots, navigated to desktop items more easily and made more precise 'shops than with our standard Logitech MX518 mouse. The sensor's not without its quirks, as Rat 7 owners can attest, as the Z-tracking (how little the mouse moves when you lift it off a surface and set it back down) is a bit off, but there's a new filter now that reduces the jitter considerably, and it didn't disturb us in games. By the way, Mad Catz says this fix will be included on new Rat 7s as well. Five teflon feet keep the mouse gliding across most any surface, and we had no trouble using it on a veneered wooden desk, though the hard surface showed us the mouse has a slight forward-backward wobble, another carryover from the Rat 7 -- this can be reduced if not fixed by carefully tightening the thumb rest's main screw while the mouse is firmly held down.

Of course, what you really want to know is if the Rat 9 has what it takes to be a wireless gaming mouse, and if Mad Catz's claims of a 0.01ms latency really hold up. We don't have the answer to the latter question, but we did have a wired Rat 7 on hand for a side-by-side test, and on the same surface with the same DPI settings we honestly couldn't tell the difference. The Rat 9 does turn itself off after several minutes, but it just takes a click to wake up, and it's instantly ready to start taking potshots without you ever needing to press the physical on/off switch on the bottom. Speaking of that switch, we haven't turned the mouse off more than once in our entire week of testing, but had impressive battery life nonetheless -- we found we were usually able to get through a full day of work, leave the mouse on and not have to swap cartridges until partway through the next day, though it did die once after a solid eight-hour session. Even then, our freshly charged battery pack was only a fifteen-second swap away, and flashing indicators on the side of the mouse always told us well before an existing cell ran out.

As customizable as its hardware is, the Rat 9 isn't quite leading the pack on the software front. Though it's got a handy light-up toggle next to the left mouse button that swaps between three preset modes, there are only five customizable buttons, and there's no onboard memory to store your profiles (nor even factory-preset variations) on the mouse itself. There are four well-spaced DPI adjustments in the mouse by default, however, and you can certainly game without the software if you find yourself in a pinch.

Last but most assuredly not least, there's the sniper button, our favorite feature by far, which simply cuts the mouse's sensitivity to a level you customize while you hold the button down, and then instantly raises it back up when you let go. We don't know where this has been all our lives, and we don't know how we'll do without it from now on, as it's equally useful for lining up headshots and getting detailed work done. Now, rather than change our overall DPI to sweep across our wide desktop to a tiny button in our web browser and then have to adjust our wrist's velocity considerably to actually click on a link, we just squeeze that button before we need to make a selection and the mouse speed appropriately slows down.

Despite its customizable hardware, the Rat 9 won't fit everyone. It wouldn't fit our hand perfectly, though it was fairly comfortable. It won't fit pro gamers who scoff at wireless-only mice for fear of interference at LAN events, even when confronted with its superb responsiveness. And at $130, it may not fit the budgets of those who don't play games for a living. Still, aside from the occasional nitpick, we couldn't find a thing wrong with this sleek transforming mouse. That's not something we get to say often. At least one Engadget editor is putting this on his Christmas wishlist right now.
All products recommended by Engadget are selected by our editorial team, independent of our parent company. Some of our stories include affiliate links. If you buy something through one of these links, we may earn an affiliate commission.