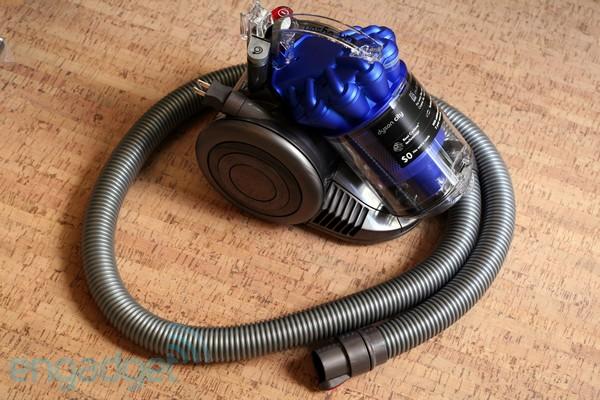 When it comes to vacuums it's obvious that we tend to like the ones that propel themselves -- your Roombas and your XV-11s and the like. But, when it comes to getting something properly clean sometimes you need to break out the manually modulated models, and those from Dyson tend to be the most coveted. The $399 Dyson City is the latest, a little sucker for those with smaller floor plans and shorter attention spans. But, we think it's good enough for country folk too.

The Dyson City was actually announced nearly a year ago and has been available in Europe for quite some time. But, it's only now getting a release in the US of A, and we're glad for it. It's the company's smallest non-handheld vac, a canister model that weighs just 12lbs. Compare that to one of the Dyson uprights, which weigh in the mid-30lb range, and you'll see it's quite an improvement.

Of course as it's a canister vac it feels even lighter because the majority of the weight hangs out behind you on the floor and you're left just swinging around a very lightweight nozzle. Naturally, as this is a Dyson, it's a reasonably high-tech nozzle. It telescopes with the push of a button and the most important attachments clip right onto it -- a sort of utility belt for fighting dust bunnies.

On the back rides the free-spinning turbine head, sitting on like a penny aft of the canister's Choro-Q-like design. Appropriately as you drag it around it loves to pop wheelies but does a commendable job of not tipping over -- a problem on many canisters.

Like other Dysons the dirt compartment lifts right out easily and the bottom flaps open with the press of a button, saving you from touching anything icky and, since you can stuff it down in the trash bin, helping to keep much of what you've sucked up from blowing all over the house again. There are also two filters onboard, both of which can be cleaned and, in theory, will never need replacement.

Tucked atop the Dyson City's cool, shimmery blue surface are a pair of buttons. One recoils the retractable power cord, which we were disappointed to find comes flying in like any basic vac's. We might have liked something with a bit of damping here. The other button of course turns it on, which means you'll be bending over whenever you want to stop or start. That too is an annoyance, and we'd have much preferred to see a power button on the handle of the telescoping arm.

Instead what you get up on the handle is a vacuum release button, a sort of panic switch that you can hit when the City starts to eat your curtains, carpet, or small pets. This doesn't actually shut off the vacuum, just lets it suck in air from the top instead to release the suction at the bottom. Handy, but we'd much prefer a proper power switch, even if it'd mean running a wire up the hose to connect it.

Bend over to turn the thing on and you'll find the little monster makes nearly as much noise as the upright model, which is a bit surprising, but we were happy to see that the considerable torrent of warm air pumped out of the canister is ducted up and back from the body, keeping it from blowing away the very shedded fur and bits of cereal you're trying to capture.


That telescoping arm is very light weight, even with the heavier but rather more narrow spinny turbine head attached. That attachment is said to be for giving dirty floors an extra clean, but we found it did an okay job on short carpet too -- so long as you kept it moving. Leave it in one place and the bristles quickly grind to a halt. While this machine delivers plenty of suction for most purposes, it simply doesn't match the lint-licking power of a bigger Dyson upright.

On hardwood or the like, though, it's a champ. If you attach the wide nozzle you can quickly and easily zip through rooms, pivoting it under and around furniture like you're on a domesticated parkour training run. However, be prepared to take lots of breaks. That easily detachable canister has a very limited capacity that's a fraction of one of the uprights. It's enough to get through a small house or largeish apartment in one shot -- assuming it wasn't too filthy to begin with.

The Dyson City is a lightweight canister that can stand up to the heavyweight upright competition -- if your floors aren't covered with shag. Cleaning up on hardwood, linoleum, and short carpet of the durable corporate variety is a cinch with the City and, thanks to its light weight, you'll get things over with more quickly. But, if you really want to give your deep pile a deep tissue massage you're still going to have to break out one of the company's heavier models. This means it is of somewhat limited use for its hefty $400 price tag, but if you have the right floors and the right means it is the right vac for you.
In this article: canister vacuum, CanisterVacuum, dc26, dyson, dyson city, dyson city dc26, DysonCity, DysonCityDc26, feature, featured, features, review, vacuum, video
All products recommended by Engadget are selected by our editorial team, independent of our parent company. Some of our stories include affiliate links. If you buy something through one of these links, we may earn an affiliate commission.
Share
Tweet
Share