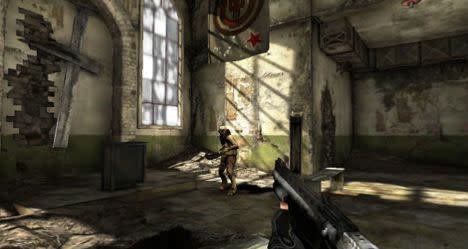 We've all seen the potential of what a demo like Epic Citadel can do, but while work continues on Infinity Blade, John Carmack's id Software has released Rage, an iOS-exclusive tie-in to the big FPS console and PC title scheduled to come out next year. The game is a pretty incredible feat in and of itself, with realistic graphics set in Rage's post-apocalyptic world and an on-rails shooting experience that feels extremely dynamic. It also has a fun reloading mechanic, a dodge button, a constant flow of mutants to shoot, and power-ups and bonuses to grab. At just one or two dollars for the SD or HD versions, Rage is a steal, and if you can play the game in full HD on the iPhone or the iPad, there's no question you should.

I got the chance to chat with Carmack himself earlier today about this game and what he thinks of the iOS platform, and you can read the results of our interview after the break below. The good news: he says he's more focused on this kind of mobile development than ever before, and as a result, he's hoping we'll see at least two more mobile games from id before the full version of Rage comes out next year.

Carmack actually has more of a history with mobile games than you might know. For almost five years, he's been developing games on mobile platforms, from Doom RPG on older cell phones to Orcs and Elves on the Nintendo DS. But it was never a main focus of his development -- it was usually just a project picked up on weekends or for a few weeks at a time. "And that's nice," he told me, "to just kind of back away from the trudging through four-plus years of development on the big ones. It's nice to go into a different field and apply yourself to some different challenges."

With Rage, however, Carmack said the company made the decision to put him on it full-time for a few different reasons. "It became clear when we started talking about doing a Rage-themed project here that this was going to be most of the public's first interaction with the Rage brand, and it was really important that this be a good interaction, that we not leave a bad taste in anyone's mouth about the title, because that would be disastrous." As a result, Carmack stepped up to the helm on this mobile game, and he says he "was on this to the exclusion of all other work for over two months, which is certainly more effort than I've ever put into a mobile project before."

It didn't hurt, says Carmack, that this was an iOS project rather than something written for another device. "It is just so much more pleasant to develop for the iOS market than for the traditional feature phones," he told me. "Being able to work on a more constrained project now and then is rewarding in a lot of ways, and of the available small platforms, I think that the iOS platform is clearly the best. We're keeping our eyes on the Android market; we'll be freeing up our first application internally on that pretty soon, but there's a lot of things with how the distribution platform works and the diversity of the platforms that you have to target, where things are still much, much nicer on the iOS world."

Unfortunately, the iOS market isn't completely united in terms of platforms. While Carmack and id decided to focus Rage on iOS devices starting from the iPhone 3GS, there was still some separation in terms of memory and graphics power. That's why the app has been released in two versions, SD and HD, both universal across the iPhone and the iPad. "It just seemed the right thing to do make them both universal," he said. "Right now on a 3GS you can buy either version and play either version. I don't really think that it's the best thing for the 3GS to run the HD version -- it plays OK, but you'll have a few more hitches and the memory warnings will crop up as it lurches and throws everything else out of memory."

Carmack thought that maybe even users who had more powerful devices would want to go with the SD version just to save space, but he says that in the first 12 hours of sales, the numbers told a different story. "Tthe HD version is just absolutely crushing the SD version on here. I was very worried that people [...] would have problems with their space, and not want to download the monstrosity on here, and some people might even prefer the smaller version, just because it takes up less space." But while there have been some complaints about the over 750MB download on the HD version, people are still buying it. "We're number 1 with the HD version, and the SD version is down like in the 30s or something," said Carmack. "This is going to influence our thinking going forward -- if it's that big of a difference, we probably won't offer the low-end, standard def version."

Rage is a great game, but it's not really an open-world FPS. It's more of an on-rails shooter that's been carefully adapted to the touchscreen interface of the iPhone. I asked Carmack, as a veteran FPS creator, if he thought it was even possible to build a full FPS experience on Apple's phone. "There is absolutely zero doubt," he replied, "that you can technically do an excellent, full-featured FPS game, because these devices are more powerful now than like a previous generation Xbox. They're still multiple intervals away from like a 360 or a PS3, but they're in the same order of magnitude, so there's no doubt that you could compile and build a wonderful FPS." We have seen a few good FPS games out there (NOVA and Archetype come to mind), but as Carmack said, "they're not as large of a success as Angry Birds." Carmack says there is a sizable market of gamers who would like that FPS experience, and "want their iPhone to replace the PSP and the DS as a serious gaming machine. But they do not dominate the market."

So what's next, then? Game Center integration, for one. "We had an implementation from early on on there, but we didn't think that we would have the opportunity to polish it enough," says Carmack apologetically. But yes, "since this game is a score-based game, putting in Game Center with leaderboards is blindingly obvious and we're definitely doing it, it just didn't quite make the first release there." That functionality will come in the game's first patch, along with a few bug fixes and a few more features, including "several more low-hanging fruit technical things that I can do to make the game even more lush and great-looking."

After that, Carmack says he's hoping to make at least two more iOS games before the full version of Rage comes out next year. He later told our sister site Joystiq that they'll probably entail some vehicle racing, and we may even see a Quake-style game come out for iOS as well. Plus, he said to me, "we could trivially fill out three games," in terms of content available from the full Rage development, "and the team was really only hitting its stride at the end of this development, where we really came to grips with what we could do in this format, to make it exciting and gripping, where you're kind of being pulled through this movie, doing all of the action things in there."

We'll look forward to that for sure. Rage is quite an achievement -- a first step into what's possible in terms of fully-realized graphics on the iPhone, and its on-rails, tilt-to-look gameplay is a nice example of the kinds of things that can be done outside of the traditional FPS control scheme. Carmack clearly has no shortage of ideas or enthusiasm about making games for this platform, and we look forward to seeing what else he and his company can come up with.

In this article: 3gs, features, games, gaming, id software, IdSoftware, iOS 4, Ios4, iPad, iPhone, iphone 3gs, Iphone3gs, john carmack, JohnCarmack, phones, rage, rage hd, RageHd, universal, upcoming
All products recommended by Engadget are selected by our editorial team, independent of our parent company. Some of our stories include affiliate links. If you buy something through one of these links, we may earn an affiliate commission.
Share
Tweet
Share