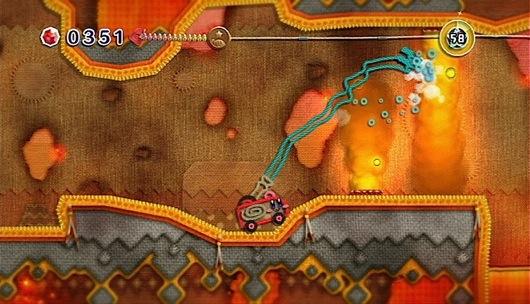 While it still stings, we're sure, to have to wait until 2011 to play Kirby's Epic Yarn, Nintendo revealed a European release date today that isn't too far into next year: February 25. You won't be able to get it for Christmas, but you could conceivably have some gift cards left over from the holiday, at least.

Perhaps it took Nintendo a while to translate all the cutesy descriptions of the collectible furniture items. Or perhaps it's taken Nintendo of Europe several months to stop hugging all the copies of the game long enough to get them into boxes.


The cute and adorable Kirby returns after almost a decade in a remarkably stitched together world of fabric and yarn. In Kirby's Epic Yarn, exclusively for Wii, help Kirby battle enemies, jump over obstacles and transform himself throughout this classic side-scrolling platformer with a twist. This imaginative wild and woolly adventure launches across Europe on February 25th 2011.

A game for all ages, children, grandparents and serious gamers alike can enjoy the twists and turns of Kirby's exploits together in a co-operative two-player mode. In Kirby's beautiful and ingenious environment, literally everything reflects the game's inventive textile theme. Whether by grabbing hold of zips or swinging on buttons, Kirby can explore the fabric environment, revealing secret areas and hidden items!

Not only is Kirby himself made of wool, but you can now transform him into an amazing array of new forms, such as a dolphin, a UFO, a steam train or even a giant robot. Due to Kirby's new woolly form, he has a new form of retaliation to replace his infamous sucking attack. Kirby now uses a yarn whip to thrash and disarm enemies, unravelling foes or rolling them up into balls of yarn to fling at anything in his way.

In this charming adventure, Kirby is thrown into a fabric world called Patch Land by the evil sorcerer Yin-Yarn and transformed into woollen string in the process. Yin-Yarn has wreaked havoc by breaking Patch Land into pieces. Kirby, joined by the plucky Prince Fluff, has to track down strands of magic thread to sew Patch Land back together. Look out for the infamous villain King Dedede, his entourage of pesky Waddle Dees and Kirby's mysterious long time rival, Meta Knight.

In amongst the battles, dramatic transformations and the quest for magic thread, Kirby also finds time for a spot of interior designing. Look out for two themed items and a piece of mmusic in each level which you can use to decorate new flats near Prince Fluff's castle – enabling Kirby to make friends and unlock new challenges.

Kirby's Epic Yarn is the first new home console game in the Kirby series since 2003's Kirby Air Ride for Nintendo GameCube. It is also the first ever Kirby game created exclusively for Wii. Whether you plan to help your mother save Patch Land, or play as Kirby while your best friend controls Prince Fluff, there will be something to enthral you in this enchanting game when Kirby's Epic Yarn comes to Europe in early 2011.
In this article: europe, good-feel, kirby, kirbys-epic-yarn, nintendo, q1-2011, release-date, wii
All products recommended by Engadget are selected by our editorial team, independent of our parent company. Some of our stories include affiliate links. If you buy something through one of these links, we may earn an affiliate commission.
Share
Tweet
Share