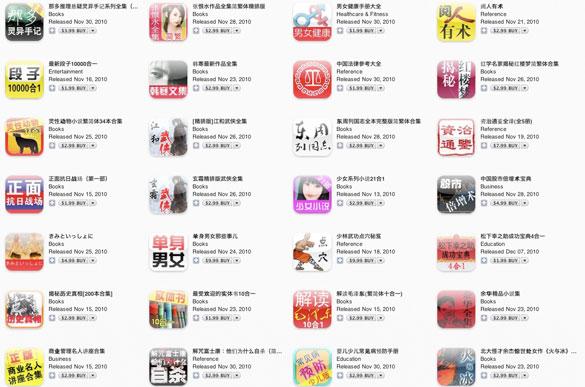 We've long written about the travails of the App Store, specifically about the hardships some developers have endured (particularly in the early days) trying to get their apps approved. Apple has, in the past year, made great strides in improving this process for developers, going so far as to publish a clear set of guidelines of what will fly. Apple has also been careful to shut down "content farms," which produce a raft of junk or merely promotional apps, and one vector for these happens to be ebook apps. One developer, Alex Brie, believes he has stumbled upon one particularly egregious junk app purveyor and possibly more.

Ebook apps are somewhat of an anomaly. Apple must walk a fine line here, as most of these apps really are promotional and/or of limited use. Why not just publish via iBooks, for example, if your ebook contains no more than text and images? One answer is backwards compatibility, yes. Another is money -- the App Store is more of a shopping haven than iBooks. Money seems to be the motivation in this "app farm" mentality, as developers can churn out dozens of titles in a day and game the system for exposure. Alex discovered AppStudio2010 has stocked the store full of ebook apps. In fact, "on November 30, 2010 alone, AppStudio2010 got 28 apps approved." Alex goes on to claim that AppStudio2010 already has over 200 "apps" on the store! More curious is their title "Chronicles of Narnia," with a description matching that of the Amazon boxed set for the C.S. Lewis series. There are others mentioned as well, including an outfit called Libro Movil with over 360 apps, and Mobido LLC with almost 300. Yesterday Alex wrote another post revealing even more of these guys, possibly based in Vietnam and certainly beyond prolific.

The point Alex makes is that submitting that many apps within a small time frame is unlikely to yield quality apps. Also, many of these apps wind up climbing the charts, nudging out higher-quality apps. How? They are being purchased, Alex claims, by the developers -- inflating the numbers in varying degrees. If Apple wants to maintain a curated store of the best quality, he suggests that it constrict the number of apps submitted per day. I think this is a fair compromise. Of course, there are many other issues with the store and developers -- critical updates and patches can go unapproved for days, as the recent store description for Sketch Fighter will show. There's also the issue of buying one's own apps in large numbers to get placement on a top 10 list. I don't see an easy solution there.

For now, it is up to the consumer to wade through what is becoming a wasteland of shoddy ebooks being cranked out from these content factories. Just this past May we wrote about spammers and app clones junking up the store. One has to wonder how the Mac App Store will fare.
In this article: app store, apple, AppStore, ebook, junk, spam
All products recommended by Engadget are selected by our editorial team, independent of our parent company. Some of our stories include affiliate links. If you buy something through one of these links, we may earn an affiliate commission.
Share
Tweet
Share