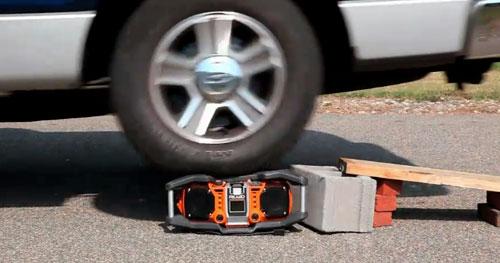 So, you've celebrated the landing of yet another construction deal by giving the whole crew their own Motorola Defy (except for Derick, who's saddled with a lowly i365), but there's still one problem: on-the-job entertainment. Enter Ridgid's Jobsite Radio, hailed as the first iPod-toting boombox designed to withstand just about anything. As you can tell, the device itself is encased in a ShockMount layer of protective armor, and we have to stress the "armor" aspect. Users simply flip down the lid in the front, slide their iPod in and then change tracks via on-board external controls or remote control from up to 25 feet away. Oh, and if Joe or Buck just so happens to bring their Zune HD into work, the 3.5mm auxiliary input will ensure that no one is publicly shamed. The unit is powered by a standard 120V or Ridgid 18V battery, and if you're curious as to just how hardcore this thing is, there's an enlightening video embedded just after the break. She's all yours after dropping $149 at the Home Depot.

See more video at our hub!
In this article: ipod, ipod accessory, IpodAccessory, jobsite, Jobsite Radio, JobsiteRadio, now available, NowAvailable, on sale, OnSale, radio, Ridgid, Ridgid radio, RidgidRadio, rugged, shockmount, tough, video
All products recommended by Engadget are selected by our editorial team, independent of our parent company. Some of our stories include affiliate links. If you buy something through one of these links, we may earn an affiliate commission.
Share
Tweet
Share