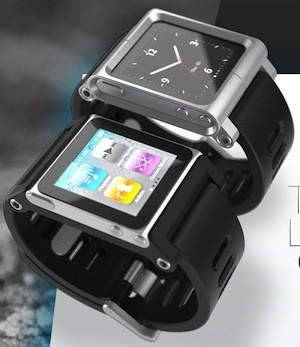 Does anyone out there want to go into business with me with a design for an iPod nano watch kit?

MINIMAL is a design house that decided to fund the development of a line of iPod nano 6G watch kits through Kickstarter. If you're not familiar with that site, it's where you can send your pet project up the proverbial flagpole and see if anyone salutes it with a pledge of funding.

Apparently MINIMAL founder and designer Scott Wilson has captured some attention with his TikTok and LunaTik iPod nano watch kits, since he raised US$941,558 in funding on Kickstarter. Considering he needed a mere $15,000 to go into production, this would be a case of overkill. Wilson's stated goal is to hopefully get these kits into Apple Stores, and with the publicity he's garnered through this highly-successful funding round, he may just get his wish.

For the time being, you can now pre-order the kits (iPod nano not included). The TikTok will sell for $34.95, while the snazzier LunaTik will pull down a cool $69.95. If you were one of the backers of the project, you'll be getting a significant discount. Want to see what all the fuss is about? Check out the video after the break.

In this article: funding, ipod nano 6G, IpodNano6g, kickstarter, MINIMAL
All products recommended by Engadget are selected by our editorial team, independent of our parent company. Some of our stories include affiliate links. If you buy something through one of these links, we may earn an affiliate commission.
Share
Tweet
Share