DARwin-OP does the up, down, left, right DDR shuffle (video) 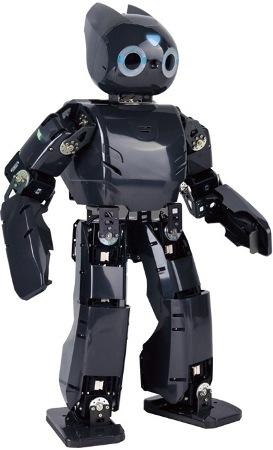 A few weeks back we caught our first glimpse of the open source, modular DARwIn-OP developed at Virginia Tech's Robotics and Mechanisms Laboratory, also known as RoMeLa. Well, there's more information available now about the upcoming little bot, so here's what we know. Korean company Robotis is making available the bot's open source software, schematics, CAD and fabrication manuals, in addition to selling the fully assembled robots. DARwin-OP was unveiled recently at the IEEE-RAS International Conference on Humanoid Robots, and is built on a 1.6GHz Intel Atom Z530-based FitPC2i which boasts a 4GB SSD, 2GB of DDR2 RAM, 802.11n WiFi. Shipments of the 17.9-inch tall humanoid robots are being sent to universities first at a price of $9,600, and will run $12,000 at full retail. Hit up the source links for a far more detailed look at DARwin-OP's specs, and there's a video after the break.
In this article: DARwIn-OP, dennis hong, DennisHong, humanoid, humanoidrobot, linux, robot, robots, RoMeLa, video
All products recommended by Engadget are selected by our editorial team, independent of our parent company. Some of our stories include affiliate links. If you buy something through one of these links, we may earn an affiliate commission.
Share
Tweet
Share