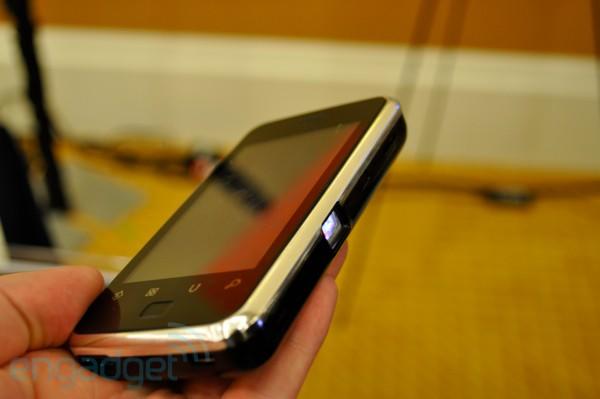 Microvision has its ShowWX+ pico projector on hand here at Digital Experience, but it also has something of a surprise: a prototype Android "mini tablet" with a built-in projector. No word on any plans for an actual release, but the device is fairly polished for a prototype, and the reference design on which it's based isn't too shabby -- it's got an ARM11 processor, Android 2.2, HDMI in and out, a 3.5-inch capacitive WVGA display, and a 5 megapixel camera. Interestingly, the device also has a 3-axis accelerometer, and Microvision was quick to point out that the device could well be suited for gaming in addition to the usual activities associated with a projector. Hit up the gallery below for a closer look.

Update: Video now after the break.

In this article: android, android tablet, AndroidTablet, ces, ces 2011, ces2011, hands-on, microvision, mini tablet, MiniTablet, pico projector, PicoProjector, projector, prototype, video
All products recommended by Engadget are selected by our editorial team, independent of our parent company. Some of our stories include affiliate links. If you buy something through one of these links, we may earn an affiliate commission.
Share
Tweet
Share