Toshiba doesn't give up on the netbooks, officially announces Mini NB305 and NB505 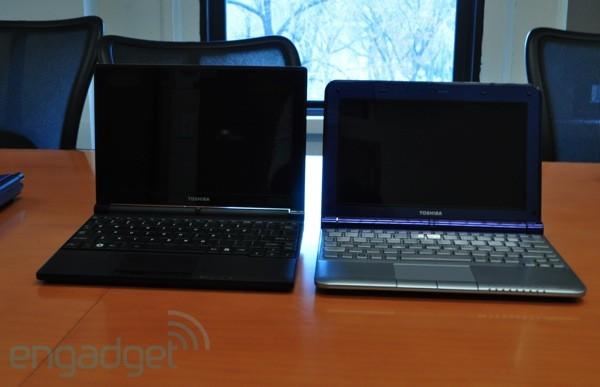 Who says netbooks and tablets can't live in harmony? In addition to its unnamed tablet, Toshiba has brought along two 10.1-inch netbooks to CES. The first -- the Mini NB505 -- is really no surprise, and similar to the one released overseas, it has an Intel Atom N455 processor, 1GB of RAM, Windows 7 Starter, and a 250GB hard drive. At $300, it's officially Tosh's cheapest netbook, but we actually have to say the spotted, rubbery lid, which is available in five colors, is a nice addition. On the higher netbook end -- yes, there is still such a thing -- Toshiba has updated the Mini NB305 with an blue, aluminum lid and a dual-core Atom N550 processor. For $380, you get a 250GB hard drive, 1GB of RAM, and that same great chiclet keyboard and touchpad combo. Alright, so isn't a Libretto W105 refresh, but hey, you can't say Toshiba's lacking in the mobile computing options department. 30
In this article: Atom N550, AtomN550, ces, ces 2011, ces2011, hands-on, NB305, NB505, netbook, netbooks, Toshiba, Toshiba Mini NB305, Toshiba Mini NB505, ToshibaMiniNb305, ToshibaMiniNb505
All products recommended by Engadget are selected by our editorial team, independent of our parent company. Some of our stories include affiliate links. If you buy something through one of these links, we may earn an affiliate commission.
Share
Tweet
Share