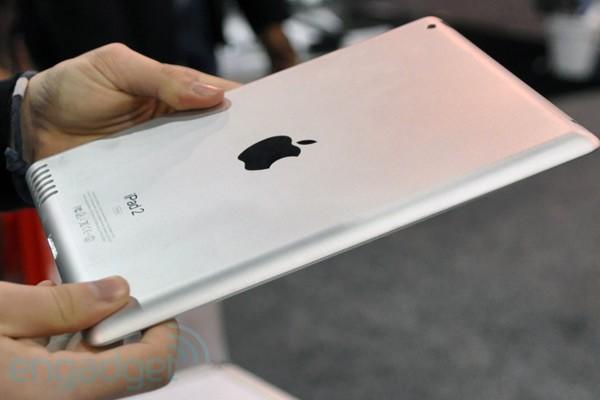 Apple itself might not be at CES, but the prospective upgrade of its iPad to version two has accessory manufacturers (or at least manufacturers' imaginations) working overtime. We've just come across our second iPad 2 mockup, this one a lot more comprehensive than the first, which seems to mesh well with some earlier imagery we've seen of the supposed next-gen Apple tablet. Not only that, its rear label reveals an A1337 product code -- one that's also shared by the current iPad WiFi + 3G -- and lists 128GB of onboard storage, two times the current tablet's maximum. We don't know what material it's made out of, but it felt felt the same as the current iPad's aluminum shell. All that said, this is still just a mockup from a no-name accessory maker and we're just as willing to believe it was put together on the basis of some decent rumor research as we are to think that it really is the iPad 2. No harm in browsing some pictures of this 9.4mm-thick device, though eh?

14
In this article: a1337, apple, breaking news, BreakingNews, ces, ces 2011, ces2011, hands-on, ipad, ipad 2, Ipad2, mockup, pre-release, rumor, speculation
All products recommended by Engadget are selected by our editorial team, independent of our parent company. Some of our stories include affiliate links. If you buy something through one of these links, we may earn an affiliate commission.
Share
Tweet
Share