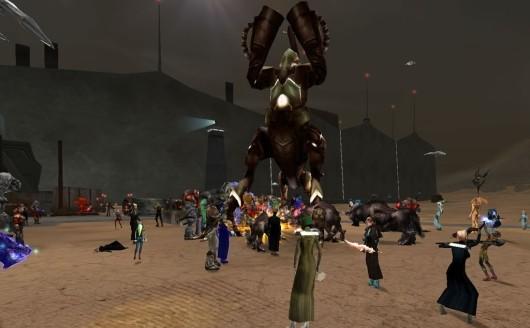 Many of us have mused from time to time what we would do if we happened to get our hands on coveted GM powers in our MMOs. While it may be tantalizing to think of slaughtering raid bosses with a single command, it's probably best that these virtual god-like powers are kept out of the public's reach. Unfortunately for the Anarchy Online team, this scenario went from hypothetical to chaotically real this past week.

AO Game Director Colin Cragg labeled it an "unplanned and unwanted volunteer event" when a player managed to access a GM account and ran amok for over two hours in the game last Tuesday. Surprisingly, the player in question did try to "put on a spectacular show with special guest stars," as Cragg put it, although the event ended up causing a huge mess. Some players became unable to fight due to fear effects while others unwittingly received special items in their inventory. The team spent over 30 hours cleaning up the situation, and Funcom had to suspend over 140 accounts until these items could be removed. It is unclear if they caught the person responsible.

Surprisingly, Cragg says that this wasn't the first time that someone took a GM account for a joyride in the game, due to the company's policy of trusting volunteers with this access. Even so, he had a few strong words for anyone who would do this: "If anyone is reading this who is responsible for these attacks GIVE US A BREAK. All we are trying to do here is trying to continue to develop a game we all enjoy. If you are mad about your accounts being banned, or something like that, please try to grow up and accept the fact that you very likely deserved it."

You can read Cragg's full account of this event at Anarchy Online.
In this article: amok, anarchy-online, ao, colin-cragg, colin-means-cragg, funcom, gm, gm-account, hijack, means, suspend-accounts, volunteer, volunteer-event
All products recommended by Engadget are selected by our editorial team, independent of our parent company. Some of our stories include affiliate links. If you buy something through one of these links, we may earn an affiliate commission.
Share
Tweet
Share