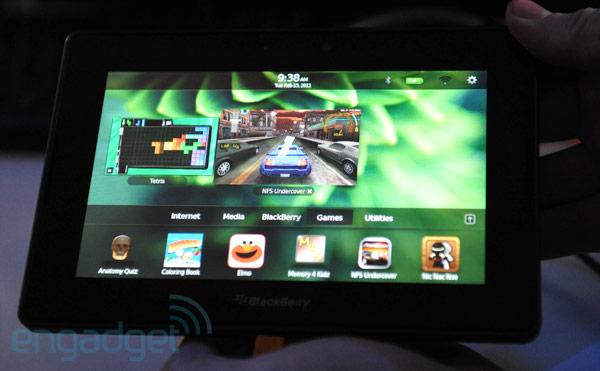 EA Sports isn't one to give things away, but that's exactly what it's doing on RIM's BlackBerry PlayBook. We still haven't heard a concrete ship date for this thing, but EA swears up and down that these two titles will be finalized by the time it goes to market. Both Tetris and Need For Speed: Undercover will come pre-loaded on the device, with both being full, unabridged versions; in fact, NFS will feature a new mode specifically designed for getting into the game quickly on this very tablet. Smartly, there's even a "slo mo" mode which slows everything down to enable accurate control even during hectic rides on the subway. We've lauded the PlayBook before, but we were duly impressed with just how well this thing handled multitasking. Even with NFS running in the background, we were able to play back a video in the foreground with nary a bit of lag during the transition. Tetris was predictably Tetris, and it only works when holding the slate vertically. We've got to confess that the inclusion of these two titles is quite the gesture, and considering the first four letters of this product's name, we'd say it's more than fitting. Hop on down to see a demonstration video of both, showcased here at Mobile World Congress in Barcelona.

Gallery: Tetris and Need For Speed: Undercover on BlackBerry PlayBook at MWC 2011 | 26 Photos

See more video at our hub!
In this article: blackberry, BlackBerry PlayBook, blackberry tablet, BlackberryPlaybook, BlackberryTablet, demo, EA, EA games, EaGames, electronic arts, ElectronicArts, games, gaming, hands-on, mwc, mwc 2011, Mwc2011, need for speed, need for speed underground, NeedForSpeed, NeedForSpeedUnderground, playbook, RIM, software, tablet, tetris, video
All products recommended by Engadget are selected by our editorial team, independent of our parent company. Some of our stories include affiliate links. If you buy something through one of these links, we may earn an affiliate commission.
Share
Tweet
Share