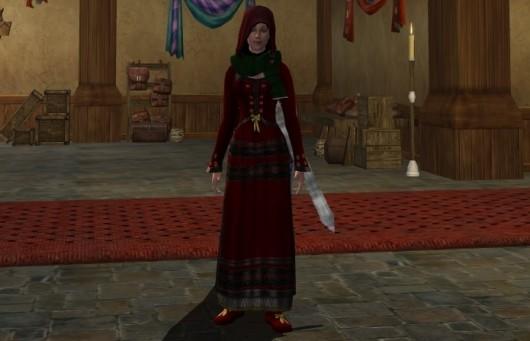 Major patch weeks are always a great deal of fun in Lord of the Rings Online as everyone digs into the new content, looks for hidden gems, and goes on grand new adventures. As much as I appreciate most everything in this week's Echoes of the Dead update, I have to say that, hands-down, the additional outfit slots made me the happiest.

Yes, I'm weird, but I can't be the only one who had an inner squeal of joy when Turbine announced that it was going to expand (via the store) the number of outfit spots from two to five. I've always, always loved the outfit system in this game as a way to give my characters a unique and aesthetically pleasing look versus having to stare at the mismatched armor they seem to pick up along the way.

In celebration of the additional outfit slots, I wanted to finally dig into the outfit system and look at the basics of Middle-earth fashion: where you get these pieces, how colors come into play, and where you might go for inspiration. So let's put on our finest frippery and strut the catwalk, ladies and gentlemen!

(I promise, next week I'll be much more manly. Probably.)

With the advent of extra outfit slots, an expanded vault, shared storage, and the wardrobe system, LotRO's given us quite a few tools to collect and store our very best threads. The wardrobe in particular is an excellent way to share outfits across several characters, so I always make sure to put my best pieces in there (but store them elsewhere as well, just in case!).

Even a novice outfitter will most likely want to collect as many good-looking articles of clothing as possible during his or her journeys, because one never knows how they might end up fitting together. There are plenty of places to start in your career as a clothes horse, such as at an outfitter (an NPC who sells basic outfits) or at the auction house. Grab what you can, but don't pay a fortune if you can help it -- many outfits on the AH can be picked up elsewhere for a little effort, saving you a lot of coin.

Personally, I'm always examining every piece of gear that drops in the dressing room window (ctrl+click) to find special models or designs. One thing that everyone realizes pretty early on is that LotRO uses armor models over and over and over again, which can make putting together an outfit that doesn't look like the rest of the crowd difficult. So an armor model that isn't seen as often is worth stashing in my wardrobe, even if it's something I'd just vendor off otherwise.

For example, on the left, my Hobbit Minstrel is wearing a hat that just dropped from a mob. Nothing great about it stat-wise, but I loved the look (it felt like a cross-breed of "safari" and "ye olde British military") and kept it. Sometimes a good outfit comes together around one key part.

Festivals are also an excellent source of outfit pieces, especially as they usually have a few unique models that aren't seen elsewhere. One of the end rewards for the Winter Festival quest chain was a pair of fingerless gloves, which has since become one of my favorite costume pieces. The Fall Festival had a slew of excellent capes and hats as well, and I've incorporated many of them into snazzy-looking outfits.

Really, outfit pieces are almost everywhere. Skirmishes have plenty of cosmetic rewards at the vendor, and some instances are worth running for distinct-looking pieces of armor as well. Once in a while, a quest reward will surprise you with a piece of gear that you won't see anywhere else.

Apart from all of these places, the final refuge of the fashionable is the LotRO store itself. Put aside how you may feel about the store -- the truth is that Turbine's offered up many excellent outfit pieces for the willing buyer, and I've gladly snatched up quite a few of them in my mission to look great. Sometimes it's something as small as a pair of boots or a hat that looks fairly normal in comparison to the goofy Middle-earth style you often see, and those are to be cherished.

Think of a good outfit like a Mr. Potato Head. Sure, there are conventional ways to put together a decent ensemble, but then you lack a personal twist and will probably bump into your twin down the road. Instead, it's fun to experiment with combinations and colors in new ways until it all just pops together.

I'm particularly proud of the above outfit, a somewhat showier set for my Lore-master. I started with the robe, which is a reputation reward from one of the Elven factions (I want to say Lothlorien?). I like this robe because, unlike most LotRO robes, it actually goes down to your feet instead of your knees -- plus it has a spiffy design to it. Now, my Lore-master didn't earn this robe; my Captain did. But because my Captain put it in her wardrobe, now any of my characters can wear it!

The next step was experimenting with colors. LotRO's dye system only offers up one dyeable area per article of clothing, which means that there are spots that have fixed colors on each piece. This means that you have to take into account both the fixed color and the changable (dyeable) one when you're trying to figure out what works overall. With the robes, the yellow was fixed, so I had to figure out what worked well with that color (the color wheel is usually helpful in this regard). Black always works with any color, but I wanted something more distinct, so I went with Ered Luin blue, then I added black boots, black festival gloves, a yellow-dyed swan cape, blue-dyed shoulder strappings, and a blue-dyed fancy hat that went on sale in the store with this patch.

A lot of people like to put outfits together around a theme. Probably the most common (and easiest to replicate) are pirate and Indiana Jones ensembles. Adventurer's robe + fedora + brown dye = whip-snapping style!

Of course, it's better to stretch yourself beyond the obvious. I've seen one or two Hobbits who've painstakingly collected farmer-themed gear to make it look as though they were pressed into adventuring when they'd rather be hoeing their carrot fields.

One of my first outfits for my Lore-master was a dingy wizard outfit in the vein of Fellowship of the Ring-era Gandalf. I know, not completely original, but that's what I wanted. The Lawgiver's Robe (a store exclusive) has grey as a fixed color, so I dyed the rest of it grey to match, adding a sage's pack and well-worn boots to match. The best piece of the outfit was a quest reward hat that looked like a droopy wizard's cap, perfect for my unassuming nature.

I'm always impressed by some of the creativity and style that other players exhibit in the game, such as the above fella who actually did something cool with a hauberk (which I never thought was possible -- I hate hauberks).

So it's never a bad thing to draw inspiration from what others have done, especially if you take their outfits as a starting point and add your own touch. To give you a helping hand in this, I've compiled a few links for you to check out the many ways that outfits can be assembled in this game:

When not enjoying second breakfast and a pint of ale, Justin "Syp" Olivetti jaws about hobbits in his Lord of the Rings Online column, The Road to Mordor. You can contact him via email at justin@massively.com or through his gaming blog, Bio Break.
In this article: auction-house, color-wheel, echoes-of-the-dead, ered-luin-blue, fall-festival, featured, festival, gandalf, hauberk, indiana-jones, lord-of-the-rings-online, lotro, lotro-store, middle-earth, mr-potato-head, outfit, outfit-system, outfits, outfitter, patch-week, pirate, pirates, safari-hat, spring-festival, the-fellowship-of-the-ring, the-road-to-mordor, turbine, turbine-entertainment, wardrobe
All products recommended by Engadget are selected by our editorial team, independent of our parent company. Some of our stories include affiliate links. If you buy something through one of these links, we may earn an affiliate commission.
Share
Tweet
Share