J. Schulman
April 1st, 2011
In this article: apple, ios, iphone, iphone remote, IphoneRemote, ir, ir blaster, ir blasters, IrBlaster, IrBlasters, remote control, remote controller, RemoteControl, RemoteController, review, universal remote, universal remote control, UniversalRemote, UniversalRemoteControl, yves behar, YvesBehar
There's no shortage of devices that aim to replace your always-missing remote control with your always-present smartphone, and the Peel is one of the more recent and unique entries into the space. A software / hardware combination consisting of a "Peel Fruit" and accompanying iOS app, the package brings a new approach to finding what to watch -- and it's unlike most other smartphone-IR options we've encountered so far. Does it all come together, or are we left wishing for more? Read on past the break to find out!
%Gallery-119969%
Peel
71
SCORE
Engadget
71
Critics
7 reviews
71
Users - Not yet scored
N/A 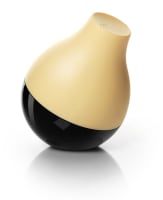 The hardware half of the Peel system consists of the Peel Fruit and accompanying Peel Cable. Designed by Yves Behar, the Fruit resembles a pear, and represents the IR-blasting component of the remote controlling pair. It's meant to sit on a coffee table within a recommended 10-15 foot range away from your TV, all-the-while emitting the necessary commands to perform other control functions issued from the companion Peel app. The Fruit takes a single C battery, and has a purported battery life of about six months -- thanks to its use of the ZigBee communication protocol instead of traditional WiFi.

The Peel Cable plugs into an Ethernet port on your router and into a standard power outlet as well. Since the entire hardware communicates via ZigBee, there should be virtually no network setup needed once your router assigns an IP address to the Peel system. We had some problems getting this to happen at first, but plugging in the Ethernet cable with the router off, and then powering it up seemed to remedy the connectivity issues. In general though, we definitely appreciate the ease of setup that comes with using ZigBee as opposed to dealing with user-unfriendly things like IP addresses and port-forwarding (we're looking at you, Sling).

Once the hardware's in place, it's time to load up the Peel app on your i-device and link your Peel Fruit. The process is pretty straightforward, and involves typing in a five-digit identifier into the app and walking through a quick setup procedure. This is where we hit our first speed bump -- there was no suitable IR code for the Sanyo TV we're using for the review. Subsequently, we had to fake the app into thinking it had a correct TV before it would even let us configure our set-top-box. Thankfully, we didn't have the missing codes problem with our Comcast DVR, and the app pulled in the correct channel lineup for us in Philadelphia. We asked the Peel crew what the procedure would be for folks whose devices weren't supported, and they say they'll add the IR codes to their database within about 24 hours after you give them a call. True to their word, our Sanyo model sprung to life just a few hours later after we received an email from support notifying us that the code had been added.

The Peel app is interesting for what it does -- and what it doesn't. The product's tagline -- "there's something on" -- demonstrates the company's view on content coordination. Rather than providing you with a familiar number pad or even channel up / down buttons, the main screen of the app has smaller frames showcasing programs it thinks you may like. By favoriting and blocking shows and channels, it attempts to build on your tastes over time to more accurately suggest content that you might like. We like the fact that it makes suggestions, and found ourselves watching shows on channels we wouldn't normally have tuned to. Still, the lack of choice is a major setback -- at least with this version of the software. We can't help but wonder why there's no straight up program guide, since it's clearly pulling in that data already.

The app's main screen consists of "top picks," which are presumably coordinated by the demographic information you enter (or choose to opt-out of) during setup. Selecting the 19-24 male group gave us top picks like "Jersey Shore" and "Bones", and we'd imagine that these picks will get better as more and more folks start using the service. The app further breaks down content into TV shows, movies, and sports. Each of these categories is further divided by genre, so you can swipe through and try to find something that suits your mood. The only annoyance when browsing is that it seems to be contextual menu after contextual menu, especially when trying to change channels. There's a handy "Last 5 Channels" button, but only when the controller is toggled into "Playback" mode (as opposed to "Navigation" mode), but we wish that was available in more screens. We also like the option to set reminders from right within the app, so you don't have to worry about missing an upcoming episode or special. The content discovery options here are certainly robust, but many folks will be perturbed by the fact that it lacks a full representation of the remote control it aims to replace.

We got to speak to the Peel guys and raise some of our concerns with the app as it is now, and we have to give them credit for having some good responses to our biggest issues. They told us that 99.9% of the core functionality used on a daily basis is present in the current version of the app, and that oddball buttons like PIP and A, B, C are rarely used. According to them, the app is really designed for tuning to programs and controlling DVR'd content -- and for those two functions it definitely does a good job.

When we asked why there was no channel up or down button, or if there were plans to add a regular program guide, they told us that "it's the show you care about, not the channel number." They do have a point, but we were assured that future releases will address some of these issues (we weren't given specifics). We did find out that an iPad app is in the works, as are apps for Android and Honeycomb specifically, so the Peel won't be iOS only forever. Finally, social sharing options will most likely get beefed up as the app matures. We're envisioning beefed up Twitter and Facebook sharing as well as possible friend following, which will hopefully help refine the suggestions even further.

The Peel -- at this point in time at least -- is a great concept for folks who don't know what they want to watch, but those who enjoy channel surfing in its current form may find it to be limited. That's not to say it's not useful when you don't know what to watch, but as power TV watchers, we'd like to have some more options. Still, the concept is definitely unique and we're all about finding new interesting stuff instead of watching DVR'ed episodes of "Gossip Girl." Overall, we like the current iteration of the Peel, and we're excited to see what's in store as the little orb starts to invade coffee tables everywhere.