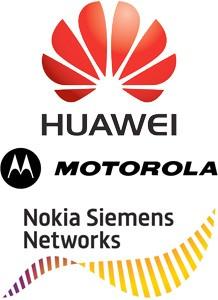 After months of fighting on the playground, Motorola and Huawei have finally come to an agreement to settle their differences once and for all. Both parties have now dropped their pending lawsuits, with Motorola originally accusing Huawei of stealing trade secrets from its former employees, and later on Huawei getting all worried about Motorola leaking confidential information over their partnership to the rivaling Nokia Siemens Networks. The new agreement will now allow Motorola "transfer its commercial agreements with Huawei to NSN for a fee," which would then permit NSN use this info to service Motorola's networks that utilise Huawei's equipment. Aww, isn't it nice when money solves everything? Press release after the break.

In 2000, Motorola and Huawei entered into an important, successful commercial relationship during which Motorola resold certain Huawei products under the Motorola name. Over the next ten years, Motorola purchased $880 million in technology from Huawei that covered core networks and radio access networks.

"We regret that these disputes have occurred between our two companies. Motorola Solutions values the long-standing relationship we have had with Huawei. After reviewing the facts, we decided to resolve these matters and return to our traditional relationship of confidence and trust. I am pleased that we can again focus on having a cooperative and productive relationship," said Greg Brown, President & CEO of Motorola Solutions.

"Throughout our decade long relationship with Motorola Solutions, Huawei has contributed cutting edge technology to Motorola Solutions for use around the globe. Huawei provided Motorola's experts and counsel with source code and millions of documents. Huawei acted properly and above board at all times and developed its products independently and without the use of any Motorola trade secrets. With the resolution of these cases, and the misunderstandings put to rest, Huawei is pleased to move forward with its efforts to provide innovative solutions to its customers," said Guo Ping, Vice Chairman of the Board and Executive Vice President of Huawei.
In this article: agreement, huawei, intellectual property, IntellectualProperty, IP, lawsuit, motorola, nokia, Nokia Siemens, Nokia Siemens Networks, NokiaSiemens, NokiaSiemensNetworks, NSN
All products recommended by Engadget are selected by our editorial team, independent of our parent company. Some of our stories include affiliate links. If you buy something through one of these links, we may earn an affiliate commission.
Share
Tweet
Share