Latest in All wheel drive

Tesla will discontinue its most affordable Model S this Sunday

Trexa's EV platform comes out of its shell, reveals its true torque-tube nature 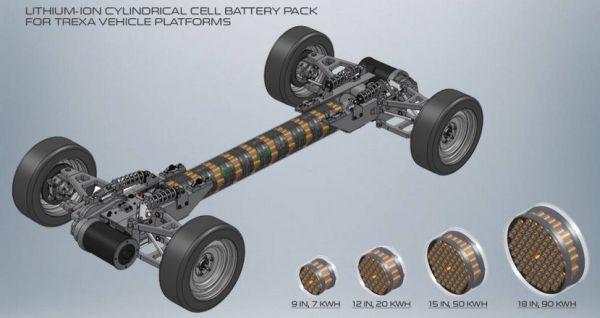 We liked what we saw when we first set eyes upon Trexa's EV platform, but the company decided to ditch the skateboard façade for a slimmer, cylindrical form factor. After stripping away that somewhat chunky exterior, Trexa used a torque tube (where the center tube is the main load-bearing structure for the suspension and drivetrain) to create an egalitarian EV platform suitable for any road going application. The Entertube chassis's both flexible (2WD or 4WD) and scalable -- from a nine-inch diameter tube with seven kWh of juice in an eight-foot wheelbase to an 18-inch diameter tunnel with a massive 90kWh power pack crammed in a 180-inch wheelbase. That means there's an EV for every occasion, from small cars to semi-trucks and anything in between. What you see is a production prototype, but it's being commercialized as we speak, so it won't be too long until Enertube-powered EVs are ready for the open road. Until then, you'll have to settle for the plethora of pics below and press release after the break. 5
Show full PR text
Los Angeles, April 11, 2011--Trexa LLC, the electric drive vehicle platform manufacturer,
announced today the filing of a U.S. patent application for its Enertube™ tubular energy
storage technology in connection with the unveiling of the TREXA® production
prototype. The first TREXA vehicle platforms will be shipped to customers for evaluation
in May.

While the TREXA concept vehicle platform introduced early last year featured an iconic "skateboard" form, the production platform is pure function. Driving this design is the Enertube, which is an energy storage system that doubles as the main load-bearing structure for a variety of vehicles. This proven concept of using a so-called "torque tube" or "backbone" chassis dates to the 1960ʼs. Differentiating the TREXA platform are interchangeable parts on all four suspension corners, which keeps parts count low, makes platform integration fast, and makes maintenance easy for end-users. All the major mechanical subsystems, including the transaxle, are manufactured by TREXA in the USA with support from Tier 1 automotive suppliers.

Vehicle applications mount to the TREXA vehicle platform by way of several hard points located on the front and rear suspension subframes. The subframes are attached to the Enertube. A pushrod suspension and 2WD or dual-motor 4WD options enables broad adjustability for both on and off-road applications. After a vehicle application is mated to
these subframes, the Enertube is able to be removed for maintenance or future upgrade of the modular battery. The current generation Enertube utilizes thermally stable lithium iron phosphate cells and a proprietary third-generation BMS (battery management system), which have been extensively tested and proven since the TREXA engineering team developed EDrive, the first commercially demonstrated li-ion PHEV, in 2006.

Central to the TREXA patent application is scalability of the battery system. The nine inch diameter Enertube utilized on the 96" wheelbase prototype contains 7 kWh of energy storage capacity, suitable as a platform for a local use plug-in vehicle or small series PHEV. However, small increases in tube diameter dramatically increase energy storage capacity. For example, an increase in diameter from nine inches to twelve yields a twofold increase in energy capacity. TREXA plans to offer Enertube-based platforms in a range of diameters and lengths, representing energy storage capacities to over 100 kWh. As a result, TREXA platforms could be the basis for electric drive vehicles ranging from golf carts to Class 8 trucks.

TREXA has formed an alliance with a large publicly-traded specialty vehicle manufacturer to commercialize the platform and Enertube technology. TREXA is also exploring electric racing in connection with a major auto racing league. In addition, the company is working with the Carnegie Mellon Robotics Institute to develop advanced functionality platforms for government and agricultural applications. The company plans to make specific announcements about its developer and supplier relationships in the coming months.

"TREXA is both a learning and a teaching company," said CEO Seth Seaberg. "We have spent a great deal of time in the past few years understanding what our developers need so we can educate them about, and provide them with, the appropriate and scalable battery technology. The Enertube is the culmination of that considerable effort."

Although initially it will work with established vehicle manufacturers and automotive R&D divisions, TREXA does have future plans to offer systems to independent, kit and custom car builders. "The DIY market has incredible potential, and there is no question that the re-emergence of electric drive is a result of grassroots efforts," said Seaberg. "So we are exploring how and when we might offer platforms, development guidelines, and support to the general public."

TREXA is funded in part by Crunch Energy LLC, a firm dedicated to developing innovative new technologies that help the world use less energy. TREXA expects to close its next round of funding this summer.

For more information, visit the companyʼs web site, www.trexa.com email info@trexa.com.
In this article: all wheel drive, AllWheelDrive, build your own, BuildYourOwn, car, cars, design your own, DesignYourOwn, development kit, development platform, DevelopmentKit, DevelopmentPlatform, eco car, eco-friendly, EcoCar, electric car, electric vehicle, ElectricCar, ElectricVehicle, enertube, ev, green, modular, trexa, trexa ev, TrexaEv
All products recommended by Engadget are selected by our editorial team, independent of our parent company. Some of our stories include affiliate links. If you buy something through one of these links, we may earn an affiliate commission.