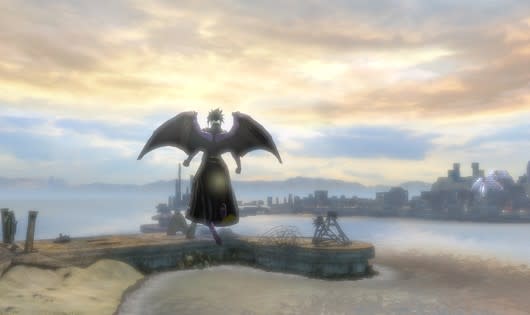 With its tie to the PS3 as well as the emergence of achievement systems in other MMOGs, the presence of achievements in DC Universe Online probably doesn't come as much of a surprise. With that said, unless you've taken the time to poke around in the Feat section, you may not be aware just how many there are for players to complete. You also may not be aware that completing feats doesn't just get you bragging rights; it also grants you additional skill points to improve your character. Whether you're the type that enjoys exploring the open world, prefers soloing, or gets into PvP matches and beats the snot out of other players, there's a little something for everyone in terms of things to unlock.

And if you happen to be on a realm where getting a group is a bit tricky and you simply love running around in the world of DC comics, feats give you something to pursue while you're waiting for friends to log in or for a group instance to pop. Additionally, in looking through the rather in-depth feat listings, you might be surprised to realize just how much lateral content you missed while you were following the main storyline for your side. From hunting iconic characters, roaming the world, and completing missions at high-speed onward to sillier things like breaking hundreds of barrels, there are tons of opportunities to further enrich your experience in DC Universe Online.

So if you've been looking for something new to try or simply want a way to continue improving your character after you hit level cap, then join me behind the break. I'll be taking a look at the many different feat types available in-game as well as offering some tips and tricks I've picked up from my own feat-mad achievement-chasing sessions.

Feats in DC Universe Online come in a variety of different flavors and are ranked for difficulty according to the number of stars displayed to the right of the name of the feat. For those who love to look around, there are exploration feats for simply wandering around the map. Frankly, these are quite possibly the cheapest and easiest in the game to get, although they will require a certain investment of time that may not appeal to everyone. Most of these center around simply touring around Gotham, Metropolis, or various raids and alerts. The additional nice thing about these -- such as finding the Bat signal or the roses in Crime Alley -- is that they help to add to the overall sense of immersion. This is, after all, the world of many well-known heroes and villains, so it's nice to see little details that tie the game world into the overall DC lore.

I'd also take a moment to note that while Collections are dead-easy to pick up (more on that later), you can only get Player Briefs and Investigations by exploring the world and instanced content. If you're the type that likes to hunt, you'll find them scattered throughout the world, and you may want to consider flight as your travel power since it offers great utility in terms of seeing an overall area from a bit further away. If, however, you just want to cut to the chase and take the shortcut, there are players who have been actively recording locations for collections, briefings and investigations on the DCUO wiki.

From there, you have Styles, which is one of three primary achievement sets I'm currently focused on. These achievements center around unlocking costume styles gathered throughout the world, and they're split into Iconic (endgame) styles and Theme (general) styles, which are quite easier to get. If you're looking for a way to build up both your wardrobe and your feat points, then you should definitely look into completing Theme Style achievements. The good news is that you can pick many of the basic ones up just by running the Vault every day, and the others can often be found on the auction house. Easy cheevos!

For those of you who are able to get a stable group of folks who are all about buffing their characters up, you can start working toward the group-centric achievement categories: Alerts, PvP, Raids and Duos. Some of them are incredibly simple and easy to get, such as purchasing a PvP trinket or completing a certain number of duos. From there, they get exponentially harder and include speed runs, certain types of takedowns against PvP opponents, and defeating bosses when they're at their nastiest.

Renown is your typical faction-grinding set of achievements. As you play through the content, you'll gather faction by completing missions and getting your gear together. Do it enough and they'll really love you. Seasonal achievements are somewhat similar, as they involve a similar grind. As the seasonal events come and go in the game, you'd be wise to dig into these as soon as new seasonal content drops and get them out of the way as quickly as you can. Most of these will involve grinding the daily seasonal quest and buying stuff with those points, which is a time investment of about 15 minutes per day. Compared to Renown, the Seasonal grind is much easier to accomplish.

General achievements are kind of a mixed bag, and quite a bit of them will require you to run around the cities like crazy, due to the reliance on Exploration achievements. The Race sub-section includes some very difficult things to unlock, which is perfect for those who love achievements based on excelling at tricky challenges. The Collections, by contrast, are fairly easy to complete en masse now that the auction house is live in the game. If you love to run around in the world and pick up collections as noted above, that's awesome. It can also be a nice side-industry if you need more money, since you can sell the extra collection tokens. If, however, you've got money to burn and you're short on time, then you might find it easier simply to scour the auction house for collection pieces. Since Update 2, we also can see straight away whether a collection piece is useful. Also, we don't have to log out and then in to use them, which makes using the auction house a much more attractive option than before.

Solo achievements are all about running the game's solo instance and story content. Surprising, I know! Many of these will be unlocked (even if you're not paying attention) when you simply level up. However, it's worth noting that there are achievements that offer alternate non-quest things to do in the game's instances, things you won't likely even know are there if you don't look. (As an aside, if you're starting from scratch, I strongly recommend taking a look at the solo achievements before you get too far into the game. Most of these can be knocked out in the regular process of leveling, thus putting you ahead of the curve.) From taking down 30 Joker clowns in the warehouse to defeating nasty bosses without using any consumables, there are quite a lot of things that can be unlocked for solo players.

Ultimately, pursuing any achievements will involve a certain amount of time, but if you start the game (or perhaps a new alt) with an eye on them, they're really surprisingly easy to get out of the way. If you zoomed to endgame without paying much attention to them (like I did), they give you a source of skill points and other things to do while you're looking for group, if standing around the Watchtower or Hall of Doom isn't really your thing.

Speaking of which, I need to go take another whack at Mr. Mxyzptlk's acrobatic race. That little punk is going down -- at least, as soon as Superman figures out how to get him to say his name backwards, anyway.

Every week on Saturday, strip off the mask of your Alter-Ego and soar through the world of DC Universe Online with Krystalle, then catch up with Larry on Wednesdays as he showcases the superhero game on the Alter-Ego livestream. Send up a bat-signal to ping Krystalle or Larry with your burning questions. (Packages wrapped in green with a purple bow will be returned unopened.)
In this article: achievements, alter-ego, cheevos, console, consoles, dc-universe, dc-universe-online, dcuo, feats, featured, PlayStation, Playstation3, ps3, soe, sony-online-entertainment
All products recommended by Engadget are selected by our editorial team, independent of our parent company. Some of our stories include affiliate links. If you buy something through one of these links, we may earn an affiliate commission.
Share
Tweet
Share