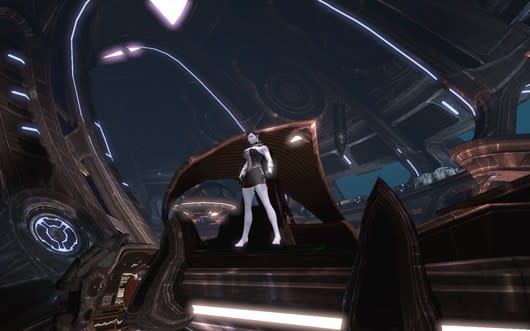 Just after my column went live last week, we saw the Sony Online Entertainment servers start to come back online. Those of us who consider DC Universe Online our MMO home were able to once again get our hero or villain on and meet up with friends we'd been relegated to catching up with on Facebook. (Don't get me wrong, Facebook is fine for what it is, but it can't compare with getting to bash virtual superhero or supervillain heads in alongside your league-mates!)

As I mentioned last week, the restoration also came with a nice variety of goodies. With the added outage time tacked onto the 30 days, everyone was awarded 45 days of free play time, which isn't too shabby. I'd also note that the 45 days free applies to all Sony Online Entertainment game accounts you might have -- whether or not they were active at the time of the outage. This offers DC Universe Online players who may have opted to cancel after the first month the perfect chance to log in and check out the content updates that have gone live since launch, without having to spend a dime.

The real question is this: What type of future might we see for DCUO in the aftermath of the outages, especially with so many players screaming that they were leaving? Join me behind the break as I look at our first week back on the mean streets.

First up, I have to note the major changes during the last few weeks in the overall management team involved with DCUO. We heard news on the 12th that John Blakely had decided to leave SOE to accept a new job with the casual gaming powerhouse, Zynga. Soon after that, we learned that Lorin "DeadMeat" Jameson would step into the Executive Producer spot after spending five years running the dev teams at SOE Austin.

In Jameson's first Producer's Letter, published in the welcome back barrage of messages, he dropped a bombshell by indicating that Mark Anderson would be stepping into the Game Director position that was occupied until recently by Chris Cao. As Anderson worked as Art Director on DCUO at launch and was responsible for the action-heavy combat system so many of us enjoy, he's certainly a solid choice the playerbase can connect with. The lingering question there is simply where Cao has gone -- something I don't suspect we'll hear too much about until he lands somewhere.

During the outage, the primary method SOE used to update its customers was posting on its Facebook fan pages, both for the company and for the various titles it publishes. Spending any amount of time in the comments on the DC Universe Online page was like surfing the forums, only in miniature. Some players were simply thankful for updates, whereas others were ready to go all Godzilla on SOE's ailing network, leaving a path of RAWR STOMP STOMP rage and destruction in their wakes. If you had to base your opinion on that alone, you might well think that the game is essentially dead now.

However, from my experience I'd say that things aren't as bleak as they might have seemed. In logging into a handful of servers since DCUO came back online, I've found that there were more people than I'd expected to see on after the outage, not less. I've seen people in the Hall of Doom and the Watchtower as normal, but there are also people running around the city maps as well, which is a bit of a change.

Perhaps the biggest difference, though, comes to us DCUO players via the forums. Before the hackings, most of the time we'd hear from Community Manager Tony "Radar X" Jones with the odd update from Cao and company. After the service interruption, not only have we gotten a shiny new update from Jameson, but he's continued to post on the forums, taking direct feedback from the players. Mark Anderson and a scattering of developers such as Mark "Tunso" Halash and others are also now taking an active part in talking with the players on the forums about everything from bugs to feature requests.

The other thing that's really refreshing about this change since the restoration is how frank Jameson is being in terms of things that the team working on the game can realistically do. Take, for example, his comment regarding a question of potentially mixing PvP and PvE leagues with DCUO's upcoming shift to using MegaServers:

"I'm afraid not, at least not initially. Since everyone is mixed together in Arenas, Alerts, etc. we disabled PvP and PvE flagged folks from joining in Leagues together. I will look at it though and perhaps we can find a way around that in the future. Thanks for the idea."

While he's not promising anything, Jameson is openly taking the lead in discussions and stating precisely why certain things won't work currently, which is nice to see. I'd also note that he has stated that the new communication policy, which offers players much more transparency and discussion than before, will be continuing in the months to come -- a change that seems to be welcome news to even the grumpiest of forum-goers.

In that same thread, Jameson notes that the current population of DCUO is "very good." It's not a specific number, but at least it indicates that despite our needing to switch to the upcoming MegaServers in order to find groups more easily, things are not all doom-and-gloom as many suggested they would be after the outage. (There is, however, some serious rage about name collisions and how they will be handled in the merge. Jameson and the team have their work cut out for them.)

With all this said, there is a great deal still to be done in terms of adding more content moving forward. As if to answer that, Update 3 looms on the horizon. While Cao led us to believe that we'd be seeing Superman content before too long, it appears that we're in for at least one more Batman-centric update. The reaction to the news of Update 3 is a mixed bag; some players are upset that we're not seeing more Green Lantern-themed content to build on the excitement of the upcoming movie, while others are simply sick and tired of Batman and long for something different. Ultimately, we only have basic details of what's coming up, although Massively will be speaking with SOE later this week regarding Update 3 and its future plans for DC Universe Online. I will be diving into that further for next week's Alter-Ego since we'll have much more information about it.

In the meantime, I don't think things are as bad as some folks claimed during the outage. Is there work to be done on the game? Absolutely. The UI could still use some love, the desire for the physical powerset is still strong among the playerbase, name collision issues loom, and there are still a handful of bugs to be squashed. MegaServers need to come online soon to be able to capitalize on the people who have returned via the 45 free days, lest they wind up leaving again due to frustration over queue times. With that said, I do feel that the game has a solid, fun foundation to build upon. The trick now for Jameson, Anderson, and the rest of the DCUO team will be to create rich content that players want while managing to maintain their openness and goodwill with the players. If they manage to do that, I'd say that DC Universe Online has a good future ahead, despite all the recent issues.

Every week on Saturday, strip off the mask of your Alter-Ego and soar through the world of DC Universe Online with Krystalle, then catch up with Larry on Wednesdays as he showcases the superhero game on the Alter-Ego livestream. Send up a bat-signal to ping Krystalle or Larry with your burning questions. (Packages wrapped in green with a purple bow will be returned unopened.)
In this article: chris-cao, dc-universe-online, dcuo, dcuo-update-3, deadmeat, executive-producer, featured, future-of-the-game, game-director, game-outage, john-blakely, lorin-jameson, mark-anderson, mark-halash, network-outage, opinion, radar-x, soe, sony-online-entertainment, tony-jones, tunso, update-3
All products recommended by Engadget are selected by our editorial team, independent of our parent company. Some of our stories include affiliate links. If you buy something through one of these links, we may earn an affiliate commission.
Share
Tweet
Share