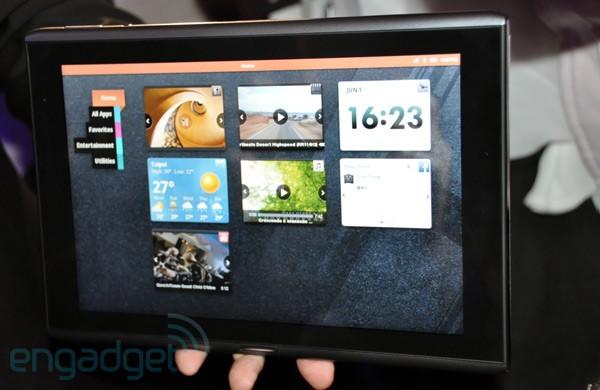 Acer's David Lee just hijacked Intel's netbooks and tablets Computex keynote to unveil a brand new 10-inch tablet: the Iconia M500. It's the first in the company's new M Series and runs MeeGo atop an Atom (Moorestown) processor. Its appearance and dimensions are strikingly similar to the company's Android tablet, the A500, and that similarity extends to the resolution of the screen as well: 1280 x 800. The MeeGo interface is a custom Acer skin offering what was described as a "snackable UI." The point seems to be to offer instant access to the things you care about, and the brief demo we saw featured a set of live widgets organized around an "Acer circle." Mr. Lee, an Assistant Vice President with the company, tells us Acer's new 10-incher will be on sale at (not by, sadly) the end of this year.

Update: We've just added a gallery of hands-on shots below and you'll find video of the M500 after the break.

In this article: 10-inch, acer, acer iconia, AcerIconia, announced, atom, breaking news, hands-on, iconia, iconia m500, IconiaM500, intel, m series, m500, meego, moorestown, MSeries, slate, tablet, video, wvga
All products recommended by Engadget are selected by our editorial team, independent of our parent company. Some of our stories include affiliate links. If you buy something through one of these links, we may earn an affiliate commission.
Share
Tweet
Share