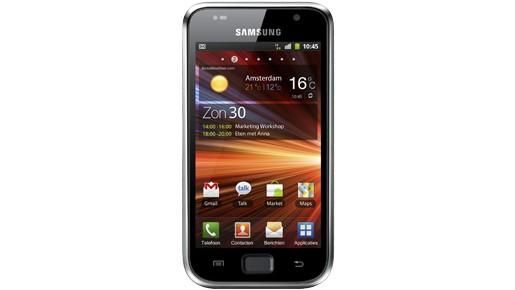 Samsung's venerable Galaxy S lineup may appear a bit sedate in comparison to the Galaxy S II, but that doesn't mean the company is allowing its former champion to collect dust. As you recall, the 2011 Edition began sprouting along Russia's shores with an upgraded 1.4GHz Qualcomm MSM8255T chip, 14.4Mbps HSPA+ radio and 1650mAh battery -- along with news it would be marketed as the Galaxy S Plus outside of The Federation. True to Sammy's word, the phone is now trekking across Eurasia, where it hopes to join the bicyclers of Holland as they dodge tourists and await net neutrality legislation. Absent any carrier commitments, this 2011 refresh will retail for €449, which could be tempting -- unless you're already pocketing a Galaxy S II, that is. Google's translation of the Dutch PR suggests a launch that's coming "soon," and you're invited to hop the break for some linguistic giggles.

Delft, June 7, 2011 - Samsung launches the Galaxy S Plus the enhanced version of Samsung's most successful smartphone ever: the Galaxy S. Samsung S are the Galaxy last year alone 10 million copies sold worldwide. The Samsung S Galaxy Plus is faster than its predecessor thanks to the powerful 1.4 GHz processor and 2.3 Android ™ Gingerbread. This is the latest version of the world's most popular operating system for smartphones. The Samsung S Galaxy Plus is due to its super-sharp AMOLED display to conserve battery life that a 10% increase in capacity.

The improved and faster version of the Galaxy S is a remarkably thin smartphone. At the Super AMOLED display Samsung Galaxy S Plus you can enjoy crisp and clear pictures and videos . Through Swype run half as fast text by tapping the touch screen is simply a line between the letters of a word to draw.

Powerful performance
The 1.4 GHz processor, 14.4 + HSPA connectivity and a magnified internal memory, the Galaxy S Plus everything you need for great performance. You can speed the web browsing, multi-tasking as a PC graphics and animations in the best quality to enjoy. Data sharing is also fast. The HSPA + 14.4 compound increases the download speed significantly. You can easily send files to other devices or a Wi-Fi hub network. You can also go online with your laptop via the Internet of the Galaxy S Plus. Its 1650 mAh battery, one of the most powerful battery currently, you need the smartphone to charge less than you expect.

The various applications on the Android Samsung Galaxy S Plus under the Gingerbread OS give access to mobile services such as Gmail ™, Google Maps and Google Voice Search Navigation ™. In the online shops and Samsung ™ Market Apps hundreds of thousands find applications such as traffic news, rainfall radar and IENS restaurant guide. The Galaxy S Plus is also equipped with Samsung MMM widget that gives access to local content and news feeds.

The Samsung S Galaxy Plus is available soon for € 449 inc.

[Translated from Dutch by Google]
In this article: 1.4ghz, 2011 edition, 2011Edition, 4g, android, android 2.3, Android2.3, galaxy s, galaxy s plus, GalaxyS, GalaxySPlus, gingerbread, holland, hspa, i9001, mobile, MSM8255, netherlands, qualcomm, russia, samsung, samsung galaxy s, SamsungGalaxyS, smartphone, smartphones, snapdragon
All products recommended by Engadget are selected by our editorial team, independent of our parent company. Some of our stories include affiliate links. If you buy something through one of these links, we may earn an affiliate commission.
Share
Tweet
Share