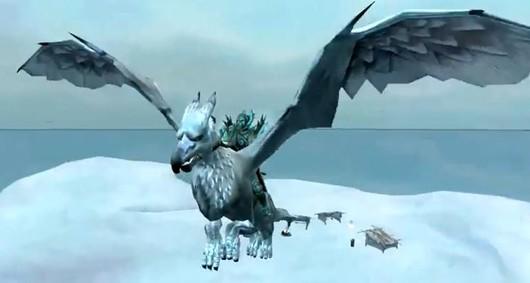 EverQuest II recently announced that flying mounts (or more accurately, gliding and leaping mounts) are coming to a sub-90 character near you. Predictably, the community reaction was one part "awesome" and two parts "zomg nooooo," both of which were also heard en masse when endgame flying mounts were announced in 2010.

The naysaying consensus seems to be that flying mounts cheapen progression-based gameplay by providing an easy way around troublesome mob spawns. That said, there's no denying the lure of unrestricted flight in our MMOs, particularly in a world as large and as topographically diverse as Norrath (and players are of course free to ignore what is essentially a new form of fast travel).

For today's Daily Grind, we'd like to know your thoughts on flying mounts. Specifically, do you like them or do you feel they add more negative than positive to the MMO experience?

Every morning, the Massively bloggers probe the minds of their readers with deep, thought-provoking questions about that most serious of topics: massively online gaming. We crave your opinions, so grab your caffeinated beverage of choice and chime in on today's Daily Grind!
In this article: eq2, eqii, everquest-2, everquest-ii, flying-mount, flying-mounts, game-discussion, gamer-discussion, mmo-discussion, mmo-hot-topics, mmo-issues, mmo-topics, mmorpg-discussion, mmorpg-hot-topics, mmorpg-topics, opinion, soe, Sony-Online-Entertainment
All products recommended by Engadget are selected by our editorial team, independent of our parent company. Some of our stories include affiliate links. If you buy something through one of these links, we may earn an affiliate commission.
Share
Tweet
Share