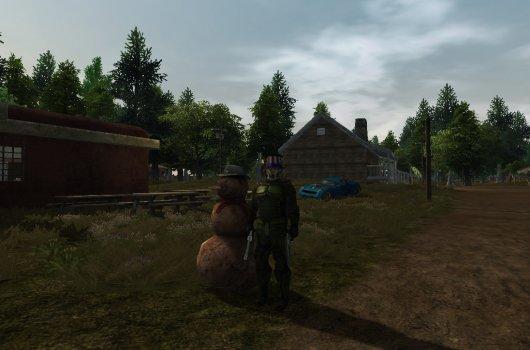 Due to the new partnership between Fallen Earth and GamersFirst, there are some huge changes coming in the very near future and massive changes headed our way before the end of the year. Sector 4 is going to be released soon along with a major re-write of the skills and abilities system. There are still a great many questions that remain unanswered, but the developers on both sides have dropped some subtle and not-so-subtle hints here and there.

There are still many players asking questions in global chat and on the forums that have been answered already. A few of the answers given have left me scratching my head, but I'm still optimistic at this point. But there's still a lot of confusion within the community about what is coming and when. I've dug up many of the responses to the toughest questions by Marie Croall of Fallen Earth and Joe Willmon of GamersFirst, who are holding their cards close to their chests but have nevertheless given up some good info. After the cut, I'll try to clarify what's going on in the short and long term, but it may result in some speculation on both our parts.

First of all, some players think that GamersFirst has taken the reins of the game's development. This isn't so; GamersFirst is only concerned with the new business model. The actual development will remain in the capable hands of Marie and her team. The only thing that has changed so far is the location of the servers and whatever technical changes that entails. The server migration is, for the most part, over, but there are obviously still a few technical issues that need to be ironed out. The new hybrid subscription model won't be in place until Q4 of this year (more on that later), so the game won't actually be free-to-play any time soon.

Probably the biggest question I see asked is this: "When is Sector 4 being released?" All indications point to its being released before the end of June. Quarter 2 ends this month, and Alpha County is slated for Q2. According to Marie, this is still on track, so we can expect it within the next two weeks, along with the skills and abilities changes (aka combat revamp).

There are also fears that, now that respecs are available on the cash shop, we won't be getting a respec for the new system. The devs have stated we will receive at least one full respec when the new system goes live, but it's advisable to try a few builds out on the public test server first. The PTS has been down since the migration, and there hasn't been any information given on its status, so you may have to fly without a net on that one. We are all going to be dropped headfirst into the new system with only one respec guaranteed, so don't mess it up. No pressure, right?

If you are wondering what the skills and abilities changes will mean, I'll give you a summary of what to expect. Your stats will no longer increase your skill minimums, so you will no longer have a bunch of low-level abilities to round out your high-level ones. You will also gain 10 more AP per level to help flesh out your skills in this new system. You will be logging in to a very empty hotbar. Much of the redundancy and reliance on lesser skill lines will be going away. Don't worry -- this is by design, and you'll just have to respec and fill that bar back up with the new stuff.

From what we've seen on the PTS, it's a dramatically simplified system that has been referred to as a skeleton. Hopefully it's been fleshed out a bit more because what we got to see on the PTS looked unfinished. The new abilities have done away with things like stuns (PvP-only, you can still stun NPCs) and knockdowns. But many of our favorite buffs and stances have been replaced with much less useful stuff. But don't worry; we will still all be on more or less equal footing since it will be a learning experience for everyone (including the devs).

There are a lot of questions about player housing. None has received a definitive answer yet, though. The devs have said housing is something that they eventually want to tackle (along with multi-passenger vehicles). But they want it to be done right. Marie has stated that she is against instanced housing, so there's no quick and easy solution coming anytime soon. My only question concerning player housing is this: What is the fascination with it? There are hundreds of abandoned buildings in the wasteland; pick one and call it home.

What are the devs going to do to make factions more meaningful? They haven't given us any of the details, but they have hinted at a major change. I don't envy them; no matter what they do, and no matter how it's done, they are going to alienate a great many players. They just have to make their decision and run with it. The status quo is currently an ineffectual faction system, so something has to be done, and it won't please everyone.

The devs are also showing an interest in making the game more sandboxy. They express a desire to build outward rather than upward and an interest in dynamic content. They don't want to add more grinding and themepark nonsense; they want to add meaningful content that the players can build on. At least their hearts are in the right place -- we will see how they handle it. We should also see progress towns before the end of the month, and I'm curious to see how popular they will be with so much happening at once. I mean, we are also getting the level cap increased along with all new gear as well as new skills and abilities and areas. Whew, breathe.

The new hybrid subscription model will add four levels of subscribers, the bottom tier being completely free. The top tier will bring a monthly charge comparable to what we have now. Free accounts will be limited in crafting and trading and will sport only one character slot. But they will be able to go anywhere and do anything. Crafting and salvaging speed and reward point, Death Toll, and random AP accrual will be tied directly to the player's subscription level as well. The highest tier will also provide a substantial buff to the player's team (not a combat buff, we are told) regardless of the teammates' subscriber levels.

If you are wondering what the developers intend to do in the near future for your playstyle(s), this comes direct from the (new) Fallen Earth Developer's Blog:Yep, it's pretty vague, but I really like what I'm seeing for all three, especially the bit about the economy. This post has gotten pretty long-winded already, and I'd like to speculate on what the three above statements might be alluding to, but I gotta go. I'll see you here next week or in Alpha County, whichever comes first.

Ed Marshall has been playing Fallen Earth since beta and leads the KAOS clan. Wasteland Diaries is his weekly column that covers all aspects of Fallen Earth: PvE, RP and PvP. To contact Ed, send an email to edward@massively.com, find him on the official forums as Casey Royer, or hunt him down in the wastelands as Nufan, Original, Death Incarnate, and Knuckles Mcsquee.
In this article: alpha-county, dynamic-content, f2p, factions, fallen-earth, fallen-earth-llc, featured, free-to-play, gamersfirst, housing, icarus, icarus-studios, joe-willmon, marie-croall, patch, player-housing, respec, revamp, sector-4, subscription, subscription-model, wasteland-diaries
All products recommended by Engadget are selected by our editorial team, independent of our parent company. Some of our stories include affiliate links. If you buy something through one of these links, we may earn an affiliate commission.
Share
Tweet
Share