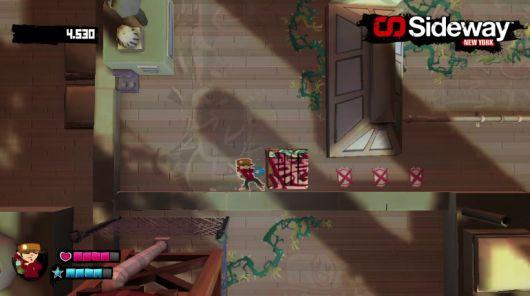 We already knew a little something about most of the games seen at Comic-Con this year, from the well-traveled Gears of War 3 to the just-announced Ultimate Marvel vs. Capcom 3, but Sideway stands alone as the only brand-new title playable on the show floor. It's a platformer coming to PSN with an interesting origin, and a premise that literally turns the genre on its side.

The game (which was referred to as Sideway: New York on promotional posters at the con) is part of a property developed by Fuel Entertainment, a creative house that's also working on a deal to turn the idea into a TV cartoon. They teamed up with fellow Ottawa, Ontario-based developers Playbrains to handle the development and Sony Online Entertainment to handle publishing; the PSN title will serve as an introduction to what the team hopes becomes a larger universe.

That universe centers around Nox, a graffiti tagger who himself is turned into art by a rival tagger named Spray. The game sends Nox around 15 different platforming levels, each one of which is painted on the side of a building, essentially placing his 2D action in a projection on a 3D world.

The premise basically means that whenever you transition from one side of a building to the other, gravity switches with you, and that makes for all kinds of fun twists in the gameplay, like entering a roof from one side of the building to play with gravity one way, or entering another to turn things around. There are some physics in the items, too -- we're not talking about Super Meat Boy levels of platforming complexity here, but there are some interesting segments to play through.

Being a spray of paint, as Nox is, also allows for some interesting moves -- he can spray on platforms in certain areas, and throws blobs of paint to attack the bad guys. While I didn't get to see the big pink bunny of a boss, I was (unsurprisingly!) told his art looked great. I did see an interesting part with cannons that had to be aimed and fired in the right order, to send Nox flying across to the end of that level.

The look of the game is a little disappointing, actually -- being that Nox is a spray of graffiti, you'd think Playbrains would completely take advantage and really blow out the way both he and the levels looked, maybe even with tags and art that reference major graffiti standbys. But while the design is pretty good, Playbrain's Scott Simpson said that fitting the title in the larger property made for a few changes. "We had a completely different look to the game when we pitched it," he told me. It's too bad -- it's easy to see Sideway and imagine a game where nearly photorealistic graffiti art runs and jumps in a gritty urban environment, but in the actual title, even the "real world" the art moves through is fairly stylized and cartoony.

There's hope yet; Simpson said the game will take players through New York's boroughs as it plays, eventually climaxing in the middle of Times Square (and any future titles, as you might have guessed from that promotional subtitle, will head out to other cities around the world). New York is obviously an urban environment with plenty of style, so hopefully, in a game based on living art, Playbrain will take full advantage.

Still, if nothing else, the game seems like a fun, simple platformer, and the option to do timed runs as well as two-player co-op (couch only -- "it's more fun to play with your friends on the couch," says Simpson) adds some extra value. My short play session hinted that the game might not live up to its full potential, but we don't have long to wait anyway -- SOE and Playbrains plan to have the game out later on this summer.
In this article: fuel-entertainment, licensed, pc, playbrain, playstation, property, ps3, psn, sideway, tv
All products recommended by Engadget are selected by our editorial team, independent of our parent company. Some of our stories include affiliate links. If you buy something through one of these links, we may earn an affiliate commission.
Share
Tweet
Share