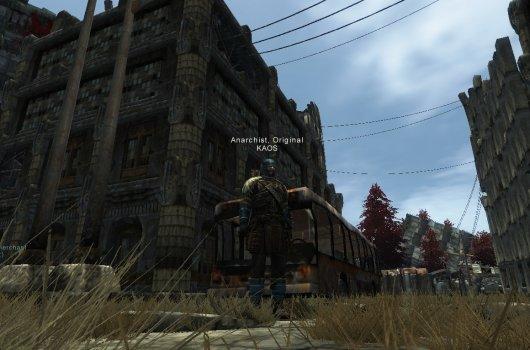 I've determined that I'll make this week's post a bit of a history lesson. How did Fallen Earth fall? I'll tell you, because if there is one thing I can't possibly fault about the Fallen Earth dev team, it's their writing. Though it's a little far-fetched (in my opinion), the background lore is pretty good. The game dialogue is second to none, but it's the lore we are going to take a closer look at.

Much of the story unfolds and is fleshed out throughout the game while talking to various NPCs. But knowing the back-story will help you understand a little better about what is going on in the Grand Canyon Province, especially how the factions inter-relate. So click past the cut and let's get started.

The beginning of the end started with the Shiva Virus somewhere in the vicinity of India and Pakistan. The virus was highly contagious, undetectable, and fatal. It was the kind of virus that made the superflu in The Stand seem like a runny nose. If that wasn't bad enough news for humanity and civilization as we know it, there was some finger-pointing which led to nuke-launching, and things just got worse from there. Before long, 99% of the entire planet's population had either succumbed to the virus or to other various war-related problems.

The Grand Canyon province was hit by a couple of nuclear weapons which caused some ruptured Rothium kegs to expel radioactive nanites. I'm not quite sure what the environmental repercussions from that were, but if you take a good look at a prairie chicken or a lizard-dog, you will see that it wasn't exactly beneficial. But, to understand what GlobalTech's role was in all of this, we'll have to go back in time -- to before the virus.

GlobalTech was founded in 2020, developing Rothium kegs and nano-technology three years later. It wasn't until 2044 that LifeNet cloning was developed. You can thank LifeNet (which is a subsidiary of GlobalTech) for the fact that Fallen Earth is not a perma-death game. In 2049, GlobalTech became an autonomous, self-governed entity within the United States. They were actively opposed (and attacked) by the Vistas, which were the first of the six factions to be formed. Some would argue (myself included) that the Vistas were formed in 1969 at Woodstock. When things began to spiral out of control, GlobalTech abandoned the Kaibab Forest and took control of the Grand Canyon province and the Hoover Dam.

GlobalTech didn't hold on to the dam for very long as the garrison threw the GlobalTech leaders out and Colonel Orsun Masters took control. This guy decided to promote himself to general and put his son, William into his former position as Colonel. William took boss's-son-buffoonery to unprecedented levels. The Children of the Apocalypse (CHOTA) is a name given to the mutated Shiva survivors that regularly attacked the forces in control of the dam. In an attempt to quell the raiders, Masters attacked a settlement called Five Points, killing many of the CHOTA inhabitants. In return, the CHOTA assassinated William and an enraged Alec Masters took the reigns of both the Techs and Enforcers.

Masters became obsessed with destroying the CHOTA, but first he (in a thoroughly insane fashion) decided to make more enemies by attacking a Lightbearer monastery in Red Farm, killing the Lightbearer's leader and founder, Shakti. The White Crow aided in the attack since they are the quintessential bad guys and ruthless mercenaries in Fallen Earth. Many of the Enforcers were alienated by this act, but there is no open revolt until the dam is assaulted. The Traveler families united and joined the CHOTA. The Lightbearers aided in the attack along with the Vistas. If you did the tutorial in the game, these are the events that transpire, with you smack dab in the middle of it.

The four-faction army (in Fallen Earth's very first "rainbow zerg"), attacked the dam and found that Alec Masters had been conducting experiments on live test subjects and generally doing the mad scientist thing. The CHOTA, led by Redhand, captured and summarily executed Alec. The White Crow engaged the Enforcers, which helped the attackers, as the Enforcers combated Master's personal army. The Techs decided that discretion was the better part of valor and headed for the hills -- Dawson Hill to be precise, which was a pre-fall industrial complex where they built "the University." The Enforcers rallied under Colonel Elizabeth Pryce who denounced Masters and evacuated the dam.

Aro Sei, which was Alec's second-in-command, ordered that the dam be destroyed. With the help of Elena Winters, a cool-under-pressure clone (me...or you, I guess, depending on how you look at it) drove the bomb a safe distance away but died in the process. Before dying, Master's messed up the LifeNet mainframe and jumbled that clone's DNA. That is the basis of the game's main quest line and will acquaint you with the first of many men named Graham.

Aro Sei is also dead now, killed by players during an event in Deadfall. But, the remnants of Alec Masters' forces were able to procure a nuclear missile and wipe out Boneclaw. They destroyed the town in-game, and killed everyone in the vicinity of the blast as well. When the Fallen Earth developers want to remove a town, they do it with style (though we all miss Monkeytown).

The plot diverges a little bit once everyone leaves the dam, and I'll leave it up to you to write the rest. On that note, I had better check my crafting queues. I'm sure there's something productive I should be doing in the game right now. Hopefully next week I'll be discussing what's new, rather than the days gone by. See you then.

Ed Marshall has been playing Fallen Earth since beta and leads the KAOS clan. Wasteland Diaries is his weekly column that covers all aspects of Fallen Earth: PvE, RP and PvP. To contact Ed, send an email to edward@massively.com, find him on the official forums as Casey Royer, or hunt him down in the wastelands as Nufan, Original, Death Incarnate, and Knuckles Mcsquee.
In this article: alec-masters, aro-sei, chota, enforcers, fallen-earth, fallen-earth-llc, featured, gamersfirst, globaltech, icarus-studios, lifenet, lore, nano-technology, redhand, rothium-kegs, shiva-virus, white-crow
All products recommended by Engadget are selected by our editorial team, independent of our parent company. Some of our stories include affiliate links. If you buy something through one of these links, we may earn an affiliate commission.
Share
Tweet
Share