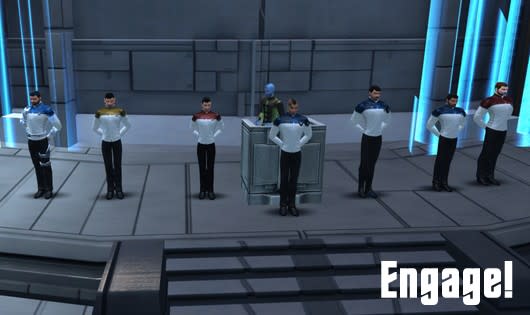 Hello, computer (and players)! In the Star Trek Online universe, fleets are the foundation that ensures ones' in-game (and even out-of-game) experience is one that is active, social, and fulfilling. Whether you enjoy PvP, Special Task Forces, role play, or a combo of all the above, there should be a fleet out there for you to call home. But, what do you do if you can not find one that suits your warp core? Well, you start your own! That's right! Gather your friends (or make new ones), visit the fleet contact on Earth Space Dock, think up a clever name, and click that "create" button.

Okay, okay -- I make it sound a lot easier than it actually is. Building a fleet takes a lot of work, time and dedication, but is possible with the right spirit at the helm. Then, just when you have it built, successfully running it becomes an even bigger challenge. During this week's Captain's Log, I am going to take you on a tour of duty as we explore a possible structuring to your future fleet. Based off of one of the most successful fleets in-game, Stonewall Fleet, which has had over 1,400 members sign-up for membership, let's take a look at the roles they have in place to make it all happen.

Ensign, warp 10! Let's help our readers create the perfect structure to their fleet...

The Fleet Admiral, as you can guess, plays the most important role in the entire Admiralty -- they set the pace of the group, delegate tasks, communicate the vision, and are ultimately responsible for everything that goes on in the fleet. To be a successful Fleet Admiral, this person must be strong in character, interpersonal skills, talent development, leadership, and motivation. It is important to note that this role is not for everyone -- even if you are the "founder" of the fleet, you may not be the best person to take on this position. While it may be hard to give up the reins, it is sometimes necessary if you want a successful group.

We caught up with Nick Swinford, Fleet Admiral of Stonewall Fleet, for some words of wisdom on what the position means to him:

Leading a guild isn't about the position or the power; it's about laying the seeds of a community, nurturing them and helping them grow. Too may people start guilds for the sake of running one, not for the desire to serve others. To be successful at starting a guild and running it, it needs to be a selfless act for there will be many thankless nights of work, worry and stress. Though, in the end, watching your community bare fruit will make it all worth it.

Although the Fleet Admiral is at the top of the ranks, they can only be as good as their Admiralty. Let's now explore some of the support roles:

Ambassador and Admiral of Recruitment

In Stonewall Fleet, the Ambassador and Recruitment Officer are combined into one role. The main responsibilities of this individual include: communicating with other fleets on behalf of the Admiralty and membership, effectively being the fleet's voice, creating solid relationships with other Ambassadors, creating and posting in recruiting threads in forums around the Internet, and being a point of contact for inquiries about becoming a member. When there is an individual in place that can do this role effectively, a fleet can see increases in membership numbers and the number of allies it has. A strong candidate will have great character and interpersonal skills.

The Combat Officer's main responsibility is to oversee the operations of the fleet that relate to in-game gameplay and out-of-game training -- a successful candidate will be someone who loves a fast-paced environment, is patient, and can effectively adapt to each fleetie's gaming style and skill set. This person also plans weekly combat events and facilitates organizing STF runs.

While additional duties will vary from fleet to fleet, Stonewall's Combat Officer also oversees The Hazard Team. This is a group of fleeties that are looking to enhance their PvP skills and work towards becoming known as one of the best PvP fleets. Through various training nights, in-game practices, and scrimmages against allies, Stonewall hopes to be that group you pray you don't run into in a PvP match.

While this is a newly introduced position, the Fleet Resources Officer is responsible for maintaining records of the assets that the fleet "owns." From Energy Credits, to data samples, to food and commodity supplies, this person is dedicated to keeping things organized. While Stonewall does not currently provide loans to its fleet members (all of their donated credits are being saved up for their future fleet starbase), this would be the position that would determine their terms and conditions. When recruiting for this role, look for one who is highly organized and responsible.

The Intel Officer's main responsibility is to obtain and relay information to the fleet and its officers. Whether this is through watching all of the dev posts, keeping up-to-date with the news, or listening to the various game-related podcasts, this person should be there to answer new and existing members' questions about the game and development -- a strong candidate should also play the game actively and understand all of its mechanics.

In Stonewall Fleet, the Intel Officer is also responsible for overseeing a few different groups and priorities. The first of these is The Crafting Corp -- a small group of individuals who have their crafting maxed out, create items for the fleet, and help ensure the fleet's bank is stocked with data samples and rare particle traces. Next, this officer is also the Editor-in-Chief of their monthly newsletter, The Stonewall Times. While they do not write every article, they oversee the monthly layout and recruit members who enjoy journalism. Last, but not least, this officer helps plan social events in-game and out.

If you did not already figure it out from the name, this officer is responsible for everything related to the Fleet's operations on the Klingon faction (KDF). Stonewall's KDF house, the House of nagh reD, is a full-fledged section of the fleet that is highly active. The Klingon Affairs Officer generates interest in fleeties playing on their Klingon character, holds regular events that are KDF-specific, and answers members' questions. Since there are many more players playing on their Federation character at any given time, this role requires a strong individual that can go against the current to get people excited to participate.

One of the most daunting, yet most fulfilling, roles is that of the Personnel Officer -- by far, this person spends the most amount of time out-of-game working on their duties. Some of these include roster checks (imagine going through hundreds of characters), promoting members to their correct membership level (raises as membership length increases), and processing all new member applications.

This Admiral is also like the counselor of the fleet -- fleeties feel comfortable going to this person to talk about issues they are having and to seek out advice. While it may be uncomfortable and awkward, this officer also assists members with rectifying situations that breech the Code of Conduct. A strong candidate has to be patient, an excellent listener, has effective empathizing skills, and can keep things in the strictest of confidence.

While the above roles each have their own areas of specialization, they all share in some of the general, everyday duties. Some of these include: in-game invites, creating and running in-game events, moderation of in- and out-of-game communications, enforcing the Code of Conduct, answering general questions, pointing members to the correct Admiral to ask for specific advice, and assisting with other projects that are ongoing.

Well, Captains, we have come to the end of this week's log entry. As you can see, there are a lot of aspects to think about before creating a fleet and much more to think about to maintain one. While some of the mentioned roles may not fit into every group, I hope it at least gives you a basis to go off of. Also, if you don't know by now, the Las Vegas Star Trek Convention is coming up next week! Many of the STO devs, as well as myself, will be in attendance and are planning to meet-up with some players, so keep your eye on the Massively.com homepage, as a big announcement about the meet-up will be posted soon. Lastly, please join me for the next STO livestream on Wednesday, August 10th, at noon EDT.

Until next time, let me know how you run your fleet, or if you have any questions, by commenting below or sending me an email to brandon@massively.com.