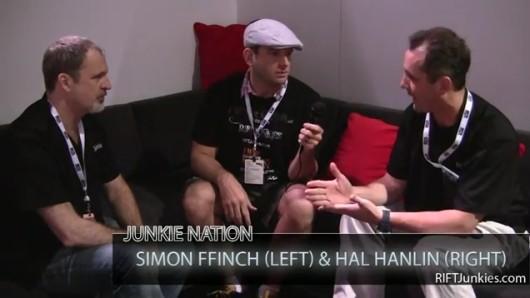 PAX has come and gone, but the good news keeps pouring out. Over the weekend, RIFT fan site Rift Junkies got the opportunity to grill Trion's Simon Ffinch and Hal Hanlin about the show itself and the upcoming 1.5 patch.

Generally, the devs were pleased to see the crowds pack around Trion's booth, especially since playable stations were always full. They noted that many current RIFT players came to log into their accounts and show off the game to newcomers.

Patch 1.5 was a major focus of the interview, and Ffinch and Hanlin said that casual players should rejoice at its approach. Tentatively scheduled for September, 1.5 will include the new Chronicles system that has solo or duoing players exploring hand-crafted instances. These instances are designed to be "snapshots" of the larger raids they're associated with, and will give both casuals and raiders a better glimpse into the lore behind the setting. For example, the Hammerknell Chronicle will tell the story of how the king and prince become corrupted.

The patch, which is called Ashes of History, will also include the new planar attunement trees ("It's the players beginning to start taking controls of the powers of the planes," Ffinch explained) and the super-tough "master mode" for dungeons. It's interesting to note that this patch is setting the groundwork for the exploration of a larger Telara, as players will begin to find and renovate items that will eventually allow them to head to new zones.

Hit the jump to watch the full interview!

Massively's on the ground in Seattle during the weekend of August 26-28, bringing you all the best news from PAX Prime 2011. Whether you're dying to know more about SWTOR, Guild Wars 2, City of Heroes, or any MMO in between, you can bet we'll have it covered!
In this article: 1.5, ashes-of-history, chronicles, chronicles-of-telara, event, hal-hanlin, hammerknell, instant-adventures, interview, master-dungeons, master-mode, patch-1.5, pax, pax-prime, pax-prime-2011, planar-attunement, rift, rift-junkies, riftjunkies, Simon-Ffinch, telara, video
All products recommended by Engadget are selected by our editorial team, independent of our parent company. Some of our stories include affiliate links. If you buy something through one of these links, we may earn an affiliate commission.
Share
Tweet
Share