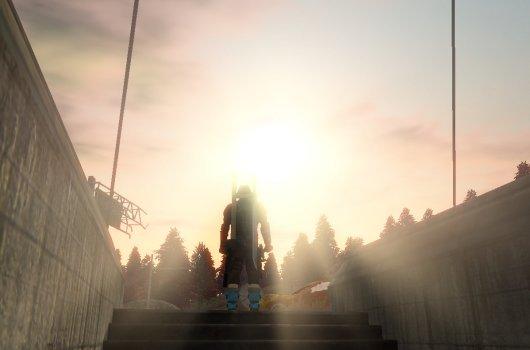 Fallen Earth is going free-to-play on October 12th. That's the plan, anyway. Four different subscriber levels will be available. The free accounts will actually have quite a bit of freedom with in the game (in fact, I'm shocked at how few restrictions they will have). The highest tier is a bit pricey for what you get, but we don't want a pay-to-win system, right? There's a fine line between giving paying customers something worthwhile and upsetting the balance of the entire universe. I'll discuss each subscription level later on in the post.

There are still a few concerns that many in the Fallen Earth community (including me) have about the F2P transition, and not all of them are technical concerns. I'm really not sure what to expect exactly as far as numbers of players, but I'm sure we'll see a huge influx of players both new and returning. How many exactly? I don't have a clue. I'll cover the sub levels first and then discuss my fears about what's to come afterward. So click past the cut and let's get started.

There are four different subscription models, as I mentioned before. They include Scavenger, which is the aptly named free account, and Survivalist, which is a step up from free but below what a current subscriber gets now. Its cost is $9.99. The next tier is Wastelander at $14.99, and it is analogous to a current Fallen Earth P2P subscriber. The top tier is Commander, and it is $29.99 a month. It's a little expensive for what it grants, but I'll probably still pay it since it only amounts to a dollar a day. Whether you'll shell out 30 bucks a month or not is up to you.

The best thing about the way this F2P system is set up is that there is no content that will be unavailable to free accounts. Anyone and everyone will have access to all quests, all areas, all skills, and all missions. There will be no maximum level for free accounts (aside from the game's level cap, of course). Free accounts can even form and join clans. Many of the benefits that paying customers will receive are simply matters of convenience, so free players will have a great deal of freedom afforded them without their having to pay a cent. I think it will work wonders when it comes to populating the wasteland, and more players is a good thing, all technical issues aside (more on that later).

All types of accounts will also have unlimited access to Blood Sports. If the population is high enough to make the matches occur more often, then this will be a very welcomed addition to the wasteland. Sittting in the queue for an hour or more waiting for the match to start is a pain. And matches always seem to start at the most inopportune times.

The free accounts will have no access to customer support, but they will be able to use the Help chat channel. They will not, however, be able to use the Global chat channels. They will never know the joy of Ron's rantings and ravings or the perpetual silence that is Global 2. Chat channel limitations are a minor thing, so the free account is still looking pretty good. The free account will also have unlimited access to the mail system, the auction house and the trade window. When I asked about the concerns of possible gold-farming, Joe Willmon (Linus) of GamersFirst responded:

"Gold farming behavior in regular players, yes, but not necessarily the gold farmers themselves. We have tradeable Premium in another game we publish, we just need to find time in the dev schedule for Fallen Earth to create it (right now it's jam packed with silly stuff like game content as opposed to awesome things like tradeable Premium that will help me fill my money-pool)."

His response really gets my gears turning as I wonder about how the upcoming economy changes will affect day-to-day life in the wastelands. I'm hoping for something drastic because the current economy is far from exuberant.

At this point, you are probably wondering: What are the restrictions on the free accounts? There is a limit of one character slot. Survivalist level gets two, and the two top tiers get four. I get six because I'm special. Actually I paid for two extra slots on the FE store, and so can you, and you will get to keep them after the transition, regardless of subscriber level. I should mention that you will retain any slots you already have filled even if you unsubscribe. The limit is for new accounts created after the F2P transition.

Free accounts will also be limited on the total amount of chips they can possess. Technically, everyone is limited in this respect, since we can only possess 9,999,999 chips each. Good luck doing that, though. The developers have not mentioned what the actual chip cap will be, but as we approach launch day, more information will be forthcoming. Free accounts will also be limited to eight hours a day of craft queue time. While this won't affect most casual crafters, manufacturing vehicles and such would be prohibitively inefficient on a free account.

Crafting, harvesting and salvaging speed will be scaled with the type of account. The variance in speed is minimal, but every little bit of time saved is definitely a good thing. The free accounts will do everything a bit more slowly (about 20%), and the Survivalist level will be the current rate. The top two tiers will have increased speeds. Point gains will also be slower or faster (or remain the same in the case of the Survivalist level) depending on which package you subscribe to. By point gains I mean Experience, Death Toll, faction and random AP.

Each account level will receive a varying number of Reward Points. Even the Scavenger level will receive 50 per month. Survivalists will get 100, Wastelanders 300 and Commanders will receive 500. I currently receive over 300 per month since there is a cumulative bonus for concurrent subscription and I've been subbed since launch. Oh well, 500 is still better than what I'm getting now. The Reward Merchants can be found in select towns and sell a lot of useful items and a lot of fluff, too. The reward points can be spend there in any manner you please, and the devs promise to add more stuff as time goes on. All paying accounts also get a monthly reward that hasn't been specified. It will most likely be an item code mailed to you.

In addition to all its other perks, the Commander tier also has an aura. The aura increases the point gains of all your all team members by 5% (including yourself). This aura stacks not only with all other auras but with the auras of other Commanders, up to 30%. It still seems to me that $29.99 is a little much, but it's not going to stop me from paying for this level.

For more information and particular amounts check out this chart.

The free-to-play transition will undoubtedly increase the population of the wasteland. Hopefully the hardware and the software can withstand the influx of players. I'm assuming there will be an influx, but I'm no expert in this field. The servers handled it pretty well at launch, and I remember situations involving quests to kill coyotes when there was none to be found anywhere -- just clones in LifeNet gear as far as the eye could see. There are currently lag issues with the game, but they don't seem to be linked to server population. Hopefully, GamersFirst will get these lag issues solved before the flood gates are opened. I'll see all you Scavengers, Survivalists, Wastelanders, and Commanders out in the wastes, or maybe back here next week.

Ed Marshall has been playing Fallen Earth since beta and leads the KAOS clan. Wasteland Diaries is his weekly column that covers all aspects of Fallen Earth: PvE, RP and PvP. To contact Ed, send an email to edward@massively.com, find him on the official forums as Casey Royer, or hunt him down in the wastelands as Nufan, Original, Death Incarnate, and Knuckles Mcsquee.
In this article: Commander, commander-aura, f2p, fallen-earth, fallen-earth-llc, featured, free-to-play, gamersfirst, icarus-studios, p2p, pay-to-play, reward-points, scavenger, subscription-model, survivalist, wastelander
All products recommended by Engadget are selected by our editorial team, independent of our parent company. Some of our stories include affiliate links. If you buy something through one of these links, we may earn an affiliate commission.
Share
Tweet
Share