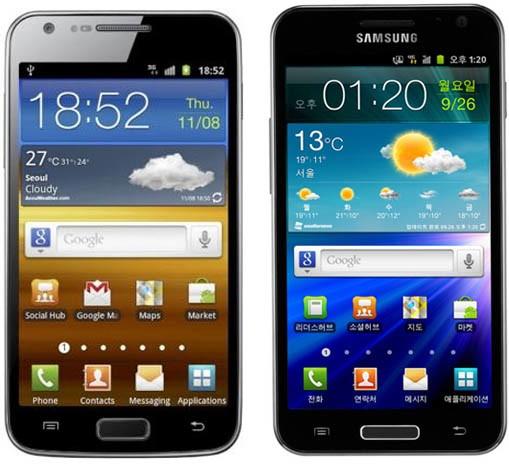 There's some pretty big news coming out of South Korea today, where Samsung has just announced the Galaxy S II LTE handset, along with its even more alluring cousin, the Galaxy S II HD LTE -- the first member of the Galaxy S family to rock an HD display. The new device, pictured on the right, boasts a 4.65-inch HD Super AMOLED screen with 1280 x 720 resolution, which translates to about 316 pixels per inch. Other than that, its specs are identical to those of the Gingerbread-laced S II LTE, which is powered by a 1.5GHz dual-core processor and features 16GB of internal memory, an eight megapixel camera that supports 1080p HD video and the usual collection of WiFi, Bluetooth, GPS and NFC capabilities. No word yet on pricing or availability, but the Galaxy S II LTE will be available exclusively on SK Telecom, while the HD variant will be available on all three Korean carriers -- SK Telecom, LG U+ and KT. Full PR after the break.
Show full PR text
Samsung opens the door to the high speed, high resolution 4G era by unveiling new LTE smartphone line up in Korea

"Using the advanced technologies it has as the leader of the domestic smartphone market, Samsung Electronics will enable consumers to enjoy a truly smart life with the LTE smartphone. The company will continue to release innovative LTE smart devices in the domestic market, thereby leading the LTE market", said JK Shin, President and Head of Samsung's Mobile Communications Business.

The portability has been enhanced with a slim design (9.5mm), while offering powerful smartphone performance, including Android 2.3, the latest version of the Android platform, 4.5-inch WVGA (800×480) SuperAMOLED Plus, and 1.5GHz dual core AP.

Multimedia functions have also been substantially improved including the 8 megapixel camera, 1080p-level full HD video, and TV-OUT function based on the MHL (Mobile High-Definition Link) adapter.

With HD (1280X720) resolution, the HD Super AMOLED is the first AMOLED display to feature 316 pixels per inch (ppi), higher than the standard 300ppi, resulting in substantial improvements in screen sharpness and readability.

A wide variety of high-resolution content services that are provided via the LTE communication network, such as high-resolution video telephony, real-time VOD services, and network games, can be enjoyed more vividly thanks to the HD SuperAMOLED.
The GALAXY S II HD LTE will serve as an 'HD theater in hand' by offering an optimal environment for watching films, including the large 4.65-inch screen, screen ratio of 16:9, 110％ natural color reproduction, and 180-degree viewing angle that ensures a clear image from far left or right.

The phone supports multiple modes including LTE, HSPA＋ (for SKT and KT) and Rev.A (for LGU＋), and WCDMA/GSM (roaming), enabling a domestic user to seamlessly access the fastest high speed wireless Internet.

Substantial improvements were made to the design as well. The narrow bezel technology was employed for the front to make the frame of the 4.65-inch AMOLED display as thin as possible. Emphasis was thus placed on a slim, refined design. The slim feature (9.5mm) ensures a more comfortable grip.