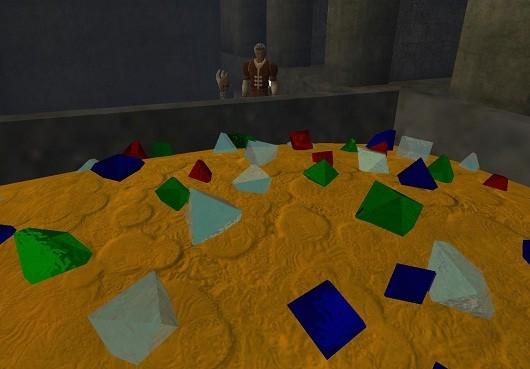 For the past few weeks of The Tattered Notebook, I've explored EverQuest II's Extended server, Freeport, to see what gameplay is like on the other side of the wall that separates it from its subscription-based cousins. This week, I'm going to look at the scenario that all EQII players consider: making all servers free-to-play. It's a very complicated issue, and there are excellent arguments on both sides, but there are a few factors that tend to tip the scales.

I don't have nearly enough space in this column to touch on every issue involving a free-to-play transition, so I'm going to focus on a few of the most important ones and give my thoughts on what would need to happen if EQII did indeed go free-to-play on all servers.

I've touched on this before, but one of the biggest problems with making the live servers free-to-play is that you're essentially rewriting the rules of the game. Players originally signed up (and paid for) an MMO that expressly forbade the sale of in-game items for real-life money. It's like if I were to suddenly rewrite the rules of Parcheesi to state that women over 30 can bypass player blockades on the board! If I did that, my kids would leave in disgust (and I'd be the meanest mom ever). So taking a subscription-based server and suddenly making it free-to-play with a cash shop will understandably upset more than a few players.

However, the cash shop is already there on the live servers, albeit a bit more limited in what it offers. In short, the rules have already been rewritten years ago, and chances are, those who don't like the changes already left the game long ago. In addition, player-to-player RMT has also been around for a while, and I can log into Guk on any given night to hear players ask to gift Marketplace items for plat (when gifting isn't disabled, that is). We're well beyond the issue of whether a cash shop is acceptable and whether RMTs should exist. Given that fact, we're extremely close to a reconciliation with the Extended server.

The most glaring difference between the Freeport server and live servers is the community. Freeport is bustling at all levels, and there are many more choices of guilds sporting a variety of playstyles and raiding all tiers of raid content. The live servers would definitely benefit from the influx of new players that a free-to-play model would foster, and that would result in more opportunities to group and raid throughout the leveling process, not just at the higher levels.

The danger, however, is that making all servers free-to-play will end up diluting all of the servers, since new players will end up on multiple servers, rather than the one crowded one right now. If EQII does go free-to-play, it might need to do another round of mergers before doing so, similar to what Age of Conan did.

One side benefit of making the live servers free-to-play is that it will attract back players who have left the game due to the monthly cost. In a recent interview, SOE President John Smedley said that 40% of the players who left EQII cited the subscription cost as the reason for leaving. In other words, there are players who are essentially leaving in protest of the restricted payment plan on the live servers, almost a silent counter to the vocal objectors of free-to-play. Some of them, like Briarios and Wongwhey, left the live servers and started fresh on the Freeport server, but that meant leaving behind all of the characters and items they had earned on their home servers. Others have chosen to copy over their characters from live, but a copy doesn't include everything that you have. I overheard one exasperated player in Freeport open chat ask why his flying mount didn't make the trip over with his character. In fact, according to the official site, "only bags, 'No-Trade' and 'Attuned' items located in personal inventory or equipped will be copied. Other items and coin will not be transferred." And the cost of this character copy? Thirty-five dollars. Basically, the choices for that 40% who left EQII's live servers over the subscription plan aren't that great if they do want to keep playing the game.

Most of the cash shop items on the Freeport server are the same as on the live ones. But if you took away the controversial items, like the wand of obliteration, heal and power potions, and the research bonus potion, I don't think the Freeport community would complain much. The only one that might have an effect would be the harvestables, but given the fact that players on the live servers already have the guild amenity NPC that harvests for you, I don't think it's that serious an issue. The problem would mainly be the rares, which are currently on the Freeport Marketplace, and it would probably be best to just remove them or offer only lower-level ones to help new players.

Another issue, of course, is that even if you toned down the Freeport Marketplace and made it match what live servers offer, there are players who have already purchased items like mastercrafted armor and consumables from the Marketplace. If EQII transitioned to free-to-play, they would be able to transfer over to the live servers with those purchases, which might (understandably) be met with some objections from live players. But I'm reminded of a GDC talk that former SOE developer Laralynn McWilliams made about an item called the speedy kick boots in Free Realms. The speedy kick boots were a quest reward that was deemed too fast too soon in the game's age, so the team nerfed the boots. Interestingly enough, the data revealed that only 2% of the player population had actually completed the quest and received the boots, yet it happened to be the most active (and vocal) segment of the playerbase. Not surprisingly, the official game forum went nuts, and a 558-post thread ensued. By understanding the actual percentage of players who had the amped-up boots, the developers were able to comfortably reach a middle-ground -- they restored the old stats to those who had done the quest and put in a new, less-speedy version for future questers.

The same could be true of things like mastercrafted armor. Of those who have purchased armor from the Marketplace, how many are still playing? And of those, how many would still be wearing it in six months? Over time, the actual number of players who still had stat armor or retired consumables would be insignificant.

Obviously, there are some finer points to address when it comes to the cash shop, but I think overall, the two Marketplaces are pretty close to each other already. And I think Briarios from Freeport's Crafting Critters guild put it best when he suggested that the cash shop should focus on monetizing services, like transfers, name changes, and opportunities to customize the look of your character, rather than the sale of in-game items like stat armor and consumables.

If EQII did transition to free-to-play on all servers, the various payment plans would need to be made clearer and probably tweaked a bit. Overall, though, everyone would probably benefit from a variety of flexible subscription plans. Those who are long-time loyal fans can stick with a monthly subscription and get everything the game offers. New players can jump in without needing to make a monetary commitment, while those who play sparingly or who like to dabble in lots of MMOs can make a small payment and get a little more than a free-player but less than a fully subscribed one. The gold and platinum plans would need to be looked at and perhaps tweaked a bit to match up better in comparison to the monthly sub, but it's definitely doable.

The real confusion actually isn't so much with the different payment plans but with the fact that EQII is really two separate games right now. The fact that we have one free-to-play server and many live ones means they're competing with each other for every player who visits the site and has to initially decide where to play. If I see a spash screen that says on one side "click here to subscribe" and on the other side "play for free," I'm probably going to choose the free option (unless I'm Warren Buffett). Yes, there are factors that could make the subscription on live servers the better deal, but chances are, a new player who's testing the waters isn't going to rifle through the fine print to see that. It's awkward, and it's almost unbelievable that EQII fans have ended up in two fractured camps.

There's an entire segment of the player population that has been neglected during the two-game system of EQII, and that's the PvP players who want a free-to-play model. The Freeport server is PvE, and while there has been some mention of adding a free-to-play PvP server, the only avenue right now to get in some player-killing is to duel or queue up for a sparsely populated battleground. Making live servers free-to-play would entice back the EQII PvP fans who don't want to commit to a monthly plan.

There's a part of me that wants to go back to 1999, when a dragonscale cloak that was sold for real money created a scandal and nearly triggered civil war on the server. But at the same time, I do see that the glass is half-full when it comes to making EQII free-to-play on all servers. Clearly, the Extended server isn't going away, so it's time to consider meshing the two camps together into something that brings as many benefits as possible to all players. Tone down the Marketplace a bit, streamline the payment options, give us one, unified forum, and make this free-to-play thing happen on all servers. Mr. SmokeJumper, tear down this wall!

From the snow-capped mountains of New Halas to the mysterious waters of the Vasty Deep, Karen Bryan explores the lands of Norrath to share her tales of adventure. Armed with just a scimitar, a quill, and a dented iron stein, she reports on all the latest news from EverQuest II in her weekly column, The Tattered Notebook. You can send feedback or elven spirits to karen@massively.com.
In this article: eq-2, eq-ii, eq2, eq2x, eqii, EverQuest-2, everquest-2-extended, everquest-ii, everquest-ii-extended, extended, f2p, featured, free-to-play, freeport, john-smedley, karen-bryan, laralyn-mcwilliams, pvp, smokejumper, soe, Sony-Online-Entertainment, tattered-notebook
All products recommended by Engadget are selected by our editorial team, independent of our parent company. Some of our stories include affiliate links. If you buy something through one of these links, we may earn an affiliate commission.
Share
Tweet
Share