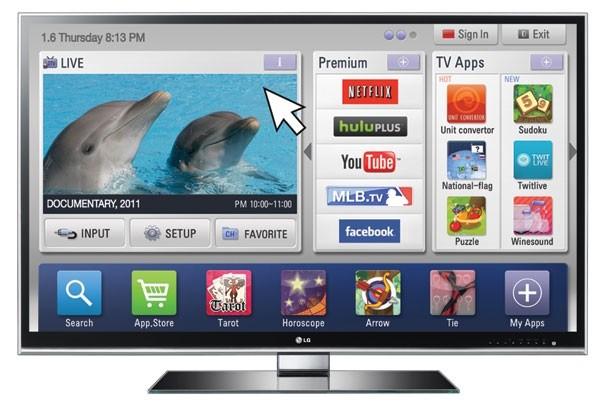 LG wants to bring the world of Adobe Flash to your living room. Yes, 2012's lineup of Smart TVs, theater systems and Blu-ray players are all set to arrive with support for both Flash Player and AIR 3, and the Korean manufacturer is keen to get developers signed up for its next-generation Smart TV SDK. The new software development kit will include a simplified dashboard, the ability to render 2D apps in 3D and even "console-quality gaming." Throw in Adobe's new Game Input API, and we could see tablets, joysticks and even LG-made smartphones used to control on-screen action. LG has informed us that these upgrades will be limited to next year's catalogue -- your 2011 purchases won't support the new software, and will have to make do with the slightly weedier Adobe Flash Lite. New Smart TVs will also be compatible with the Wiimote-esque Magic Motion Remote, bringing gesture-based awkwardness to menu selection.

At the developers' conference, LG is engaging Adobe's developer community as part of a broad effort to welcome them into the LG Smart TV ecosystem and inspire them to create and deliver Adobe® Flash® based applications powered by Adobe AIR® for the LG Smart TV platform in TVs, Blu-ray Disc™ players, home theater systems and set-top devices.

The global leader in connected devices has collaborated with Adobe to enable support for AIR 3 and Flash Player 11 on LG Smart TV platforms for 2012. This will be enabled through LG's Smart TV SDK 2.0, which is expected to be available by December.

At MAX, LG is demonstrating how to monetize developer creations through LG's vast Smart TV marketplace. "You can earn more revenue for your existing projects today by joining the LG Apps TV marketplace," said Sam Chang, general manager of LG's Innovation Development Group, based in San Jose. "With an app marketplace in over 80 countries, plus a billing and advertising API, LG can help you monetize even further."

AIR is a key element of the Flash Platform, enabling developers and content publishers to leverage existing code and familiar tools to deliver rich, standalone applications across devices and platforms. AIR 3 brings several advancements to TVs, including full hardware-accelerated rendering for 2D and 3D graphics to enable console-quality gaming applications, and full support of home entertainment systems with HD videos and 7.1 channel surround sound. Additionally, with the new Game Input API, developers can make a range of devices an integral part of the gaming experience on TV screens, including joysticks, smartphones and tablets

"Given LG's strong position in the connected device market, we're excited to be working with them to help content publishers create next-generation entertainment experiences using AIR," said Jennifer Carr, senior director, Business Development at Adobe. "Our goal is to enable developers to extend their compelling and engaging content from the desktop and mobile devices and bring it to the TV screen. LG's innovative Smart TV platform will be an exciting new opportunity for our more than three million Flash developers worldwide."

Demonstrating LG's leadership in the connected consumer electronics market, LG's unique Smart TV platform provides access to thousands of movies, apps, videos and the ability to browse the Web through an easy to navigate user interface and the user-friendly "point and click" Magic Motion Remote system.*

The home dashboard is the gateway to the LG Smart TV experience. With just four main sections – Live TV, Premium Content, LG Apps and a Launcher Bar – viewers are never more than a few clicks from a vast array of content.

For TV models, selecting features are as easy as the wave of the hand with the motion controlled Magic Motion Remote.* The remote is operated by simply pointing it at the screen, moving the cursor to the desired option and clicking on the selection. A keyboard is not needed, but a LG Remote App is available for download on Android and iOS based devices.

The LG App Store is populated with hundreds of applications for download. The platform also includes a Web browser so users no longer need to turn on their laptop to access the Internet.** With this feature, news, reviews and a host of other content can be viewed on the television screen. Of course, LG's Smart TV platform provides access to endless premium entertainment options from providers including Netflix, YouTube,™, VUDU™, Hulu Plus™, YouTube™, CinemaNow™, Amazon Video on Demand™, Pandora Radio™, Mog™ and live professional streaming sports leagues***

Complementing the built-in connectivity, LG's Smart Share also allows users to wirelessly stream content from their PCs and other compatible devices for viewing on their television screen. Smart Share also includes Media Link, which provides additional information, such as cover art or liner notes, for content being streamed.

"LG Smart TV provides viewers with endless options on their television, however, if these entertainment features are difficult to access or select, consumers will not truly enjoy the technology," Chang concluded. "We have designed our LG Smart TV platform to be as easy and simple to use as possible for consumers, making it the ideal platform for developers to reach a multitude of people with their 2D and 3D online content creations."
In this article: Adobe, adobe air, Adobe Flash, AdobeAir, AdobeFlash, hdpostmini, LG, lg smart tv, LgSmartTv, magic motion remote, MagicMotionRemote, sdk, Smart TV, smart tv sdk, SmartTv, SmartTvSdk, tv, tv interface, TvInterface, wiimote
All products recommended by Engadget are selected by our editorial team, independent of our parent company. Some of our stories include affiliate links. If you buy something through one of these links, we may earn an affiliate commission.
Share
Tweet
Share