Google wants to give doctors web-like searches for medical records 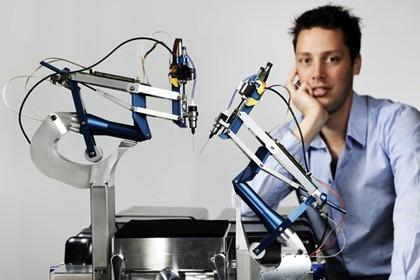 A researcher at the Netherland's Eindhoven University of Technology has invented a new type of eye surgery robot designed to steady the ophthalmologist's hands and minimize error -- always a good thing when it comes to having needles and knives near your peepers. Kind of like an Igor to a mad scientist, the robot is considered a "slave" to its "master" doctor, who controls the automaton's arms using two joysticks. The doctor is still in charge of the cuts, but the technology makes sure the MD jabs that needle in at the exact same entry point each time without shaking to minimize ocular marring. Another notable feature is the robot's ability to switch between tools quickly, ensuring that if this whole doctor thing doesn't work out, it'll at least have a job at Hibachi waiting. Jump past the break to check out the full PR.
Show full PR text

Fast high precision eye-surgery robot helps ophthalmologists
Researcher Thijs Meenink at TU/e has developed a smart eye-surgery robot that allows eye surgeons to operate with increased ease and greater precision on the retina and the vitreous humor of the eye. The system also extends the effective period during which ophthalmologists can carry out these intricate procedures. Meenink will defend his PhD thesis on Monday 31 October for his work on the robot, and intends later to commercialize his system.

Filters-out tremors
Eye operations such as retina repairs or treating a detached retina demands high precision. In most cases surgeons can only carry out these operations for a limited part of their career. "When ophthalmologists start operating they are usually already at an advanced stage in their careers", says Thijs Meenink. "But at a later age it becomes increasingly difficult to perform these intricate procedures." The new system can simply filter-out hand tremors, which significantly increases the effective working period of the ophthalmologist.

Same location every time
The robot consists of a 'master' and a 'slave'. The ophthalmologist remains fully in control, and operates from the master using two joysticks. This master was developed in an earlier PhD project at TU/e by dr.ir. Ron Hendrix. Two robot arms (the 'slave' developed by Meenink) copy the movements of the master and carry out the actual operation. The tiny needle-like instruments on the robot arms have a diameter of only 0.5 millimeter, and include forceps, surgical scissors and drains. The robot is designed such that the point at which the needle enters the eye is always at the same location, to prevent damage to the delicate eye structures.

Quick instrument change
Meenink has also designed a unique 'instrument changer' for the slave allowing the robot arms to change instruments, for example from forceps to scissors, within only a few seconds. This is an important factor in reducing the time taken by the procedure. Some eye operations can require as many as 40 instrument changes, which are normally a time consuming part of the overall procedure.

High precision movements
The surgeon's movements are scaled-down, for example so that each centimeter of motion on the joystick is translated into a movement of only one millimeter at the tip of the instrument. "This greatly increases the precision of the movements", says Meenink.
Haptic feedback The master also provides haptic feedback. Ophthalmologists currently work entirely by sight – the forces used in the operation are usually too small to be felt. However Meenink's robot can 'measure' these tiny forces, which are then amplified and transmitted to the joysticks. This allows surgeons to feel the effects of their actions, which also contributes to the precision of the procedure.

Comfort
The system developed by Meenink and Hendrix also offers ergonomic benefits. While surgeons currently are bent statically over the patient, they will soon be able to operate the robot from a comfortable seated position. In addition, the slave is so compact and lightweight that operating room staff can easily carry it and attach it to the operating table.
New procedures Ophthalmologist prof.dr. Marc de Smet (AMC Amsterdam), one of Meenink's PhD supervisors, is enthusiastic about the system – not only because of the time savings it offers, but also because in his view the limits of manual procedures have now been reached. "Robotic eye surgery is the next step in the evolution of microsurgery in ophthalmology, and will lead to the development of new and more precise procedures", de Smet explains.

Market opportunities
Both slave and master are ready for use, and Meenink intends to optimize them in the near future. He also plans to investigate the market opportunities for the robot system. Robotic eye surgery is a new development; eye surgery robots are not yet available on the market.
In this article: doctor, doctors, Eindhoven, eye, eyes, medical, medicine, Netherlands, Netherlands University of Technology, NetherlandsUniversityOfTechnology, robot, slave, surgery, Thijs Meenink, ThijsMeenink, TUe
All products recommended by Engadget are selected by our editorial team, independent of our parent company. Some of our stories include affiliate links. If you buy something through one of these links, we may earn an affiliate commission.
Share
Tweet
Share