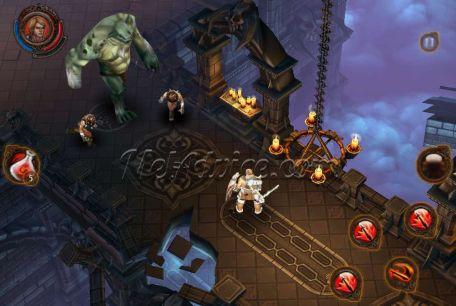 Gameloft's Dungeon Hunter series has delivered some of my favorite gameplay on iOS -- the second game, especially, has made for some really great single-player moments, and even some terrific co-op gameplay. Sure, the series is heavily influenced by Diablo and other hack-and-slash RPG titles, but considering Blizzard hasn't yet made a game for iOS yet, I'm happy to let Gameloft do it for now. Dungeon Hunter itself is so popular that it's even made the jump to the PS3 as a full downloadable console game.

And while the company hasn't actually announced Dungeon Hunter 3, that hasn't stopped a few images from the game from leaking out onto the Interwebs. Slide to Play found an Italian blog that's got a few pictures from the unannounced title, and they look ... about like what you'd expect: Better graphics, new enemies, and about the same gameplay as before. The shot above even apes what we've seen of Diablo 3 a little bit, though obviously we're not quite looking at the level of polish in Blizzard's game.

That doesn't really matter, though -- if it allows us to hack and slash through bad guys and collect the sweet, shiny loot that drops from their corpses, I'm all for it.

In this article: dungeon hunter 3, DungeonHunter3, gameloft, games, hack-and-slash, holiday, iOS, iPhone, preview, release, upcoming
All products recommended by Engadget are selected by our editorial team, independent of our parent company. Some of our stories include affiliate links. If you buy something through one of these links, we may earn an affiliate commission.
Share
Tweet
Share