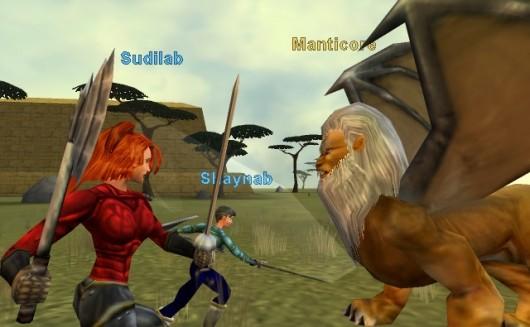 In the pantheon of Sony Online Entertainment's flagship EverQuest franchise, there is a whole family of MMOs gathered around the table every evening. There's Papa EverQuest, looking a little wrinkled and worn but also radiating fame and authority. Next to him is Mama EverQuest II, a powerful matron of entertainment if there ever was one. They look proudly down the table at a bassinet where Baby EverQuest Next lies, cooing as it grows into the future generation of this family.

Then, in the next room over is a cabinet. The cabinet is locked. Inside that cabinet is a weird abnormality that certainly looks like a member of the family, but he hasn't seen the light of day in quite some time. He subsists on the scraps of an aging console and the fading loyalty of fans, hoping against odds that one day he'll be allowed out for a stroll or something. His name is Cousin EverQuest Online Adventures, the EQ MMO nobody mentions.

EQOA is a strange abnormality in SOE's lineup. While it was one of the very first console MMOs and heir to the EverQuest name, it was quickly eclipsed in both areas by other games and left alone. Yet, against all odds, it continues to operate on the PlayStation 2, eight years and counting since its debut.

This month the Game Archaeologist will crack open that cabinet and give this interesting MMO a few weeks of attention and care. I think it's about time, don't you?

Deciding which game was the first console MMO is a debate I'm honestly not interested in dredging up today. Most folks would point to the 2000-2001 Phantasy Star Online on the Dreamcast, if your definition of MMO extends that far. Final Fantasy XI came out in Japan in 2002 but waited two years to make the transition to the States, during which EverQuest Online Adventures launched.

In any case, these were the first three titles that became the daring pioneers of console MMOing, to various ends. Consoles have proven to be very resistant to MMOs over the past decade due to the difficulty of payment options, limited (and fixed) hardware, the issue of communication, and the general impression that MMORPGs were just something that niche PC gamers played.

But in the early 2000s, the EverQuest franchise was hot, with hundreds of thousands of players exploring Norrath on a daily basis. SOE, which had taken a leap of faith to make EQ in the first place, cast its eye on the hot PlayStation 2 console as a possible candidate to expand the franchise. However, it would prove to be much more difficult than launching a title on the PC.

Former Senior Producer Clint Worley said it was tough from the get-go: "Early on with the PlayStation 2, EQOA faced a lot of challenges. The whole online gaming with the PlayStation 2 console was an admirable attempt, but it was still ahead of its time." The biggest challenge is that nobody designed consoles in the late '90s and early 2000s with MMOs in mind. Players who wanted to get into EverQuest Online Adventures had a virtual obstacle course of purchases and actions to overcome.

Not only did interested gamers have to own a PS2, a copy of EQOA, and an 8 MB memory card, but they had to find and install a network adapter, which in 2003 wasn't easy to come by for everyone. If they wanted to talk with their fellow players with anything more complicated than the simple in-game chat macro system, a PS2 USB keyboard was a must.

Even if it was the most incredible game ever, these obstacles condemned the title to a limited audience, which by all reports never topped 50,000 subscribers. While a PAL version of the game was released later in 2003, SOE would eventually pull support for it and shut down European servers in 2006, further narrowing the game's playerbase.


A prequel of all that was to come

I've always noticed that SOE is practically allergic to calling any of its MMOs "sequels." EQII is supposedly in a parallel universe, PlanetSide 2 is just a reimagining, and EQ Next will probably require mind wipes to make sure fans think this is the original. EQOA avoided sequel status, even though it was second in the series, by being set 500 years before the events of EverQuest. This prequel takes place in Norrath's "Age of Adventure," right about the time when the elves started splitting into factions.

Producer Ben Bell illustrated how EQ vets could find a new layer of depth in exploring this version of their favorite game world: "Many areas that are familiar to EverQuest players are dramatically different in EverQuest Online Adventures. For example, players can visit the Temple of Marr's Fist, which is a bustling community of Paladins and Clerics during the Age of Adventure. In later years, this same temple is known as Befallen, one of EverQuest's premier dungeons."

Due to the limitations of the console platform, EQOA was created to be a somewhat more casual experience than its big brother on the PC. Of course, "casual" in 2003 could be seen as quite unforgiving today, but still, it was certainly a step toward a nicer, friendlier MMO environment. The game was an MMO stripped to its basics: Players went out, fought, looted, and leveled up. There were quests of a sort, like turning your character into a werewolf, but nothing like what we're used to today, so most of the time people either grinded solo or with a group.

"The core design philosophy behind it was to get in and out and have fun in it in under 20 minutes or less," developer Rod Humble said in 2003. The combat was certainly faster and even allowed for more positional strategy than in EQ.

Players could choose between 10 races and 15 classes when making a new character, although classes were restricted by race. From there, they were sent into a seamless world consisting of the single continent of Tunaria to make their fortune or die trying. In fact, EQOA is notable for lessening EQ's horrific death penalty somewhat by merely taking some money away from players and adding XP debt for each demise.

Expanding into the Frontiers

EQOA's sole expansion, Frontiers, debued later in 2003. Unlike developing expansions for PC MMOs, expanding -- or even patching -- content on the PS2 was incredibly difficult due to the lack of an internal harddrive. I mean, 8 MB is all well and good if you want to throw a couple of MP3s on it, but a full expansion? Have fun with that! A completely new DVD was required to access the new content and areas that was otherwise inaccessible for players.

Frontiers beefed the game up considerably, adding an additional race, class, and several quests, increasing the level cap from 50 to 60, and adding new areas to explore. Starting with Frontiers, players could further customize their characters with Class Masteries. Garner enough CMs, and you could go and purchase yourself a cool new ability or even a master class version of your standard class.

Unfortunately, Frontiers would stand alone in the expansion department. There was word of a second expansion, but SOE ultimately decided not to go that route. "A lot of the team that would have worked on that has moved on to other products," Clint Worley said. Instead, the team kept putting out updates on a semi-regular basis.

EQOA's continued survival is fascinating, especially in today's MMO environment. While it never reached six-digit subscriber numbers, Worley said in 2007 that EQOA's churn -- the turnover between incoming and outgoing players -- was very small with a stable subscriber base. Assuming that SOE is devoting very few (if any) resources toward developing new content and is just keeping the servers on at this point, I think it's safe to say that the current number of subscribers must be producing a consistent profit.

Updates have wound down to a small handful of patches, mostly bug fixes, every year. Still, if you poke your nose into the EQOA forums, you might not find a lot of dev chatter, but you will find a hopping community that discusses the ins and outs of the game daily. Reportedly, the title also works on the PlayStation 3, although discs may be getting difficult to find.

So what does the future hold? To be honest, I'd say the best-case scenario is for SOE to keep the lights on as long as the title is making a buck, and hopefully that'll be for years to come. It may not be the most prominent EverQuest, but it did prove that console MMOs could happen, even back in 2003, and they could make it in the long run.

What are your EverQuest Online Adventures memories?

As always, we want to hear your personal, first-hand experiences with these games, which is why I'm calling on all former EverQuest Online Adventures vets to submit their favorite memories and screenshots to justin@massively.com for use in a future column!

When not clawing his eyes out at the atrocious state of general chat channels, Justin "Syp" Olivetti pulls out his history textbook for a lecture or two on the good ol' days of MMOs in The Game Archaeologist. You can contact him via email at justin@massively.com or through his gaming blog, Bio Break.
In this article: age-of-adventure, ben-bell, churn, clint-worley, console-mmo, dreamcast, eq, eqii, eqoa, everquest, everquest-ii, everquest-next, everquest-online-adventures, everquest-online-adventures-frontiers, expansion, featured, final-fantasy-xi, frontiers, norrath, phantasy-star-online, planetside-2, playstation-2, playstation-3, ps2, ps3, pso, rod-humble, soe, sony-online-entertainment, the-game-archaeologist, video
All products recommended by Engadget are selected by our editorial team, independent of our parent company. Some of our stories include affiliate links. If you buy something through one of these links, we may earn an affiliate commission.
Share
Tweet
Share