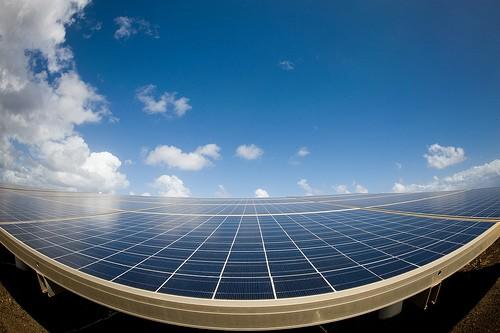 Researchers over at the National Renewable Energy Lab have reportedly made the first solar cell with an external quantum efficiency over 100 percent. Quantum efficiency relates to the number of electrons-per-second flowing in a solar cell circuit, divided by the number of photons from the energy entering. The NREL team recorded an efficiency topping out at 114 percent, by creating the first working multiple exciton generation (MEG) cell. Using MEG, a single high energy photon can produce more than one electron-hole pair per absorbed photon. The extra efficiency comes from quantum dots 'harvesting' energy that would otherwise be lost as heat. The cell itself uses anti-reflection coating on a transparent conductor, layered with zinc oxide, lead selenide, and gold. NREL scientist Arthur J. Nozik predicted as far back as 2001 that MEG would do the job, but it's taken until now for the concept to leap over from theory. The hope is, of course, that this will lead to more competitively priced solar power, fueling the transport of the future.
In this article: cell, electron, meg, multiple exciton generation, MultipleExcitonGeneration, National Renewable Energy Laboratory, NationalRenewableEnergyLaboratory, NREL, photon, quantum efficiency, QuantumEfficiency, renewable energy, RenewableEnergy, science, solar, solar cell, solar power, SolarCell, SolarPower
All products recommended by Engadget are selected by our editorial team, independent of our parent company. Some of our stories include affiliate links. If you buy something through one of these links, we may earn an affiliate commission.
Share
Tweet
Share