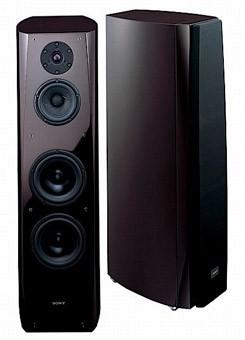 Sony has been quite busy chatting up new products for 2012 here at CES. One of the new pieces of tech is the SS-AR2 loudspeaker that looks to keep the up the reputation of its elder sibling in the R-Series line, the SS-AR1. Maple from Hokkaido, an island in northern Japan encloses all the important components and contributes to the overall sound quality. The SS-AR2 is a 4-unit, 3-way vented standing tower that sports a frequency response ranging from 42Hz to 60kHz. Distortion is combated by positioning the bass reflex port in just the right to spot to allow a duo of woofers to drive without a hitch. Birch partitions on the interior construct a well-insulated cavity keeping the midrange and tweeters just the right distance apart from the bass section -- and all those tones neat and tidy. NO word on pricing on availability as of yet, but you'll want to start bench pressing phone books before picking one up, as each unit tips the scale at 84 pounds.
Show full PR text

Because you care about music

LAS VEGAS (CES BOOTH #14200), Jan. 10, 2012 – Building on its heritage as an innovator in home audio entertainment, Sony today debuted its SS-AR2 Loudspeaker, furthering the line established last year with the introduction of its award winning and critically acclaimed predecessor, the SS-AR1.

"Sony has been committed to high resolution music since its inception,' noted Charles Speidel, vice president of Sony Electronics Home Audio Video business, "The R-series of loudspeakers are designed to recreate music as faithfully as possible, delivering an unparalleled listening experience for those devotees who truly care about music."

Signature sound starts with source materials
The key to the R-series' superb sound reproduction is the precise control of the inevitable vibrations created by sound waves. Created through exhaustive processes testing countless samples and configurations, the AR1 and AR2 loudspeakers feature a final front cabinet baffle laminated to a thickness of 50 mm and 40 mm respectively from hand-selected maple cultivated from Japan's northern island of Hokkaido, whose cold climate produces maple of a tight grain, contributing markedly to the R's beautiful sound. The front baffle couples with Nordic birch, another cold climate wood with an extremely tight grain, to project the most ideal sound reverberation properties.

Design drives performance
Like the SS-AR1, the SS-AR2's cabinet design was developed as deftly as its base materials. The bass reflex port is optimally positioned to ensure the twin woofers drive accurately and with synchronous timing, controlling back radiation and to help eliminate sound distortion. Two thick birch partitions and a small air cavity create a well-insulated enclosure inside the cabinet, separating the midrange and tweeter from the woofers, further isolating woofer back-radiation. Curved birch side panels subtly shape sound frequencies, eliminating "standing waves" and enabling clean, pinpoint imaging. Finally, gracefully curved edges on the baffle board diffuse frequencies of diffraction, producing an exceptionally vivid soundstage.

An extension of the R-Series line of loudspeakers
Like its larger sibling, the SS-AR2 loudspeaker is a 4-unit, 3-way floor-standing vented box speaker system. The SS-AR2's incorporated drivers support a maximum input power of 100 watts through a 25 mm (one inch) soft dome, a 130 mm (five inch) sliced-paper cone and a 165 mm (six and a half inches) aluminum cone (double-drive system), producing a frequency response from 42 Hz to 60kHz. The units weigh in at 84 lbs. and have a spectacular piano finish.