Samsung unveils a quartet of Android smartphones for the budget crowd

Breakfast Topic: Do you play WoW with a family member? 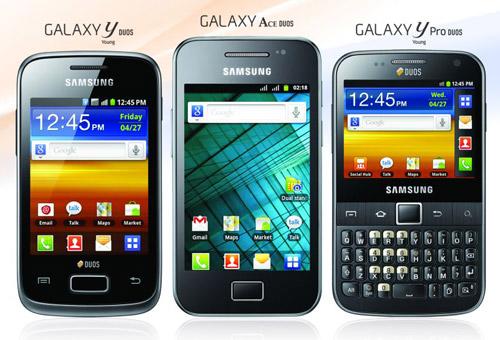 Sammy isn't taking its foot off the handset-making accelerator anytime soon. The company announced it's bringing three of its galactic machines along for an Indian ride, and while we'd previously met the dual-SIM packin' pair, the Galaxy Ace Duos is seeing life for the first time in its double-threat form. Sporting the same 832MHz CPU as its siblings, as well as a 3.5-inch display, 1650mAh battery and GSM / CDMA capabilities, the newcomer isn't much more powerful, but at least offers more screen real estate and an extra pinch of juice to get you through the day. All members of the family are rockin' Gingerbread and will start off at around $212 for the Y Duos and its Pro variant. As for the Ace, a mere $324 will let you unleash its GSM / CDMA powers.
In this article: duos, galaxy ace duos, galaxy y, galaxy y duos, galaxy y pro duos, GalaxyY, GalaxyYDuos, GalaxyYProDuos, india, mobilepostmini, sammy, samsung, samsung ace duos, Samsung Duos, samsung galaxy ace duos, samsung galaxy y, samsung galaxy y duos
All products recommended by Engadget are selected by our editorial team, independent of our parent company. Some of our stories include affiliate links. If you buy something through one of these links, we may earn an affiliate commission.
Share
Tweet
Share