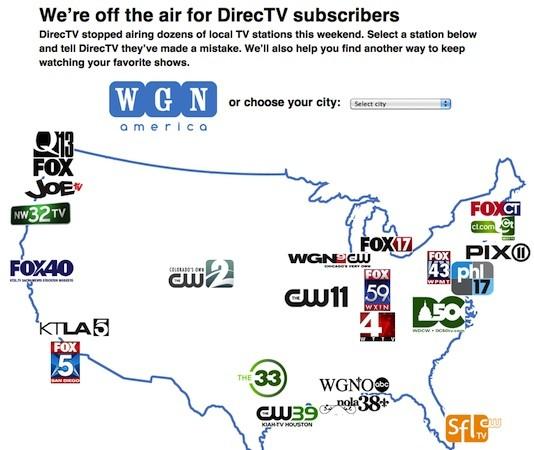 That was quick. After lobbing accusations and FCC filings back and forth for a few days, DirecTV and Tribune Broadcasting Company have come to an agreement, resulting in the satellite broadcaster turning all those stations back on at around 9PM. Even with an agreement signed sealed and delivered, DirecTV still had some shots to let off, referencing the deal it claimed had been reached back on March 28th and calling for action from the federal government. None of that matters now though, since now that it's done we can all go back to not watching Cubs and White Sox day games.
Show full PR text
Tribune Broadcasting Reaches Agreement With DirecTV
New Contract Covers 23 Local Television Stations in 19 Markets and WGN America
Tribune Broadcasting announced this evening that it has reached an agreement with DirecTV that will enable DirecTV subscribers to avoid any further disruption in service and to once again enjoy Tribune's 23 local television stations as well as WGN America, Tribune's national cable network.
"We are extremely pleased to have reached an agreement with DirecTV and to return our valuable news, entertainment and sports programming to DirecTV subscribers," said Nils Larsen, Tribune Broadcasting president. "On behalf of Tribune Broadcasting, I want to thank viewers across all of our markets for their support, understanding and patience during the negotiating process-we truly regret the service interruptions of the last several days."
The agreement comes as baseball season is about to open, and enables DirecTV subscribers to see Chicago Cubs and White Sox baseball on WGN-TV in Chicago and on WGN America, as well as the Mets on WPIX-TV in New York, Phillies baseball on PHL17 in Philadelphia, and the Washington Nationals on WDCW-TV in Washington, D.C.
DirecTV subscribers also will again have access to the more than 700 hours of local news, weather, traffic, and sports coverage produced by Tribune's local television stations, as well as prime-time entertainment programming like "American Idol," "Glee," and "New Girl," on the company's Fox affiliates, and "One Tree Hill," "Vampire Diaries," and "Gossip Girl" on its CW affiliates.

EL SEGUNDO, Calif.--(BUSINESS WIRE)-- DIRECTV and Tribune have reached a retransmission consent deal for DIRECTV to continue carrying all of Tribune's local stations and WGN America for the next five years. Terms of the deal were not disclosed.

"We're pleased that Tribune and their creditors now recognize that all DIRECTV wanted from day one was to pay fair market rates for their channels," said Derek Chang, executive vice president of Content, Strategy and Development, DIRECTV. "It's unfortunate that Tribune was willing to hold our customers hostage in an attempt to extract excessive rates, but in the end we reached a fair deal at market rates similar to what we originally agreed to on March 29. On behalf of our customers, we are very happy to close the deal and put this behind us."

Tribune restored all of their local signals and WGN America to DIRECTV customers at approximately 9 p.m. ET.

Five million American homes blacked out from their local broadcaster cries out for an examination in Washington, D.C of the decades old telecom law that encourages these impasses.
In this article: carriage dispute, CarriageDispute, directv, hdpostmini, pay-tv, satellite, wgn, wgn america, WgnAmerica
All products recommended by Engadget are selected by our editorial team, independent of our parent company. Some of our stories include affiliate links. If you buy something through one of these links, we may earn an affiliate commission.
Share
Tweet
Share