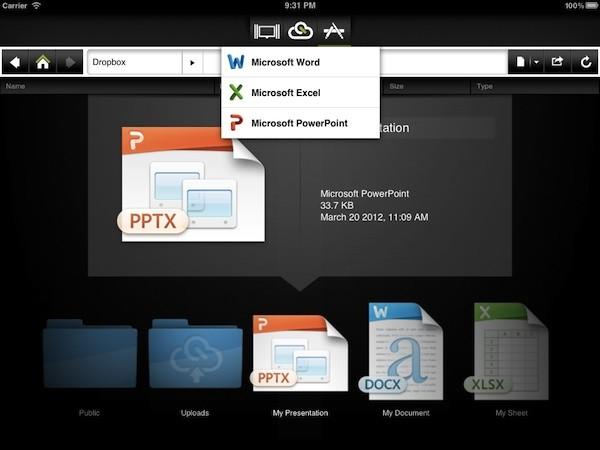 CloudOn managed to attract a fair bit of attention earlier this year with its cloud-based app that indirectly brought Microsoft Office to the iPad, and it's now back with version 2.0 of said app. That doesn't change a whole lot on the surface (though there are some UI tweaks), but it does add support for Box in addition to Dropbox for storage, as well as support for PDFs, PSDs and other formats handled by Adobe Reader. As before, the app is free, and CloudOn assures folks that it has officially licensed the technology from Microsoft and Adobe.
Show full PR text
CloudOn Lifts the iPad to New Levels of Productivity with Version 2.0 of its Popular App

Palo Alto, Calif. – April 10, 2012 –– Today CloudOn, a leader in mobile productivity, is announcing the release of CloudOn 2.0, the ultimate productivity workspace, custom built and optimized for the iPad. The cloud-based app, currently enjoyed by nearly one million consumers and professionals across the U.S., Canada and U.K., is now making it even easier to turn the iPad into a true productivity device. By providing access to the full capabilities of Microsoft Office and Adobe reader, integrated with Box and Dropbox, CloudOn users can now easily create, edit, share and save their work using only their iPad.

CloudOn operates by using the power of the cloud to connect to Microsoft Office. This allows users to create and access Microsoft Office documents exactly the way they always have, with the same look and functionality. Users have access to all of Microsoft Office features, including tracking changes in Word, manipulating pivot tables in Excel and viewing PowerPoint slideshows in full presentation mode – all from an iPad. Users can also display, edit or create charts, insert formulas, change formatting, spell check, or insert comments into any Microsoft Word, Excel, or PowerPoint document.

With the release of Version 2.0, CloudOn now gives users the ability to do more with more applications, more cloud services, and the ability to share documents easily.

CloudOn 2.0 features seamless access to content on Box or Dropbox. Users with existing Box or Dropbox accounts can log in right from the app, and then open, create, edit, share and automatically save their documents.

"Over 120,000 businesses and 82% of the Fortune 500 use Box to store, manage and access their business content," said Chris Yeh vice president of Platform at Box. "Our integration with CloudOn is a proven enterprise mobility solution that will enable millions of knowledge workers to be more productive and efficient when working from an iPad."

Version 2.0 also provides Adobe Reader to view PDFs. Everything from simple forms to complex 3-D documents. In addition, users have access to a universal viewer for any file, ranging from raw Photoshop images to everyday image files, including: PNG, JPEG and GIF.

The latest version also includes fast and easy email integration that lets users open and send emails along with attachments with a single tap and without ever leaving the app.

This is CloudOn's first official announcement in North America since its early January launch, where it skyrocketed to the no.1 free iPad app in the AppStore within hours of its release. CloudOn has consistently been a top-rated and top-downloaded productivity application in the U.S., Canadian and U.K. AppStores. With close to one million downloads in three short months, CloudOn has rapidly soared to a leadership position within the mobile productivity space.

"We believe the CloudOn workspace is revolutionizing the world of mobile productivity," said Milind Gadekar, CEO and founder of CloudOn. "The initial positive response validates the progress we've made so far. And this launch makes it even easier for our users to get to their information, use familiar applications and share their work."

CloudOn is a partner of Microsoft and Adobe has legitimately licensed the technology used to deliver the Microsoft Office and Adobe components of its service. For more information, visit http://help.cloudon.com/knowledgebase/articles/57737-is-cloudon-legal-

About CloudOn:
CloudOn is Silicon Valley based startup focused on mobile productivity. Its flagship product delivers full Microsoft Office capabilities with secure third party storage integration to the iPad making it easier than ever to create, edit, share and save the documents you need most while on the go. For more information visit: www.CloudOn.com, or follow us on Twitter @cloudoninc
In this article: adobe, adobe reader, AdobeReader, app, apple, cloud, cloud-based, cloudon, ios, ipad, ipad app, IpadApp, microsoft, microsoft office, MicrosoftOffice, minipost, office
All products recommended by Engadget are selected by our editorial team, independent of our parent company. Some of our stories include affiliate links. If you buy something through one of these links, we may earn an affiliate commission.
Share
Tweet
Share