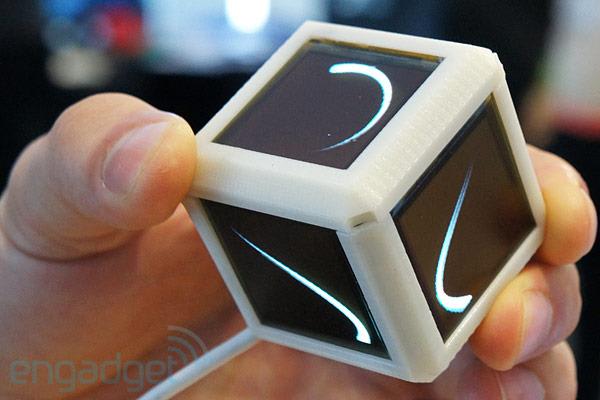 How do you develop an OLED display that gives a 360-degree perspective? Toss six 1.25-inch panels into a plastic cube, then turn it as you see fit. That's an overly simplistic explanation for the six-sided display on hand at the MIT Media Lab today, which is quite limited in its current form, but could eventually serve an enormous variety of applications. Fluid Interfaces Group Research Assistant Pol Pla i Conesa presented several such scenarios for his Display Blocks, which consist of 128 x 128-pixel OLED panels. Take, for example, the 2004 film Crash, which tells interweaving stories that could be presented simultaneously with such a display -- simply rotate the cube until you land on a narrative you'd like to follow, and the soundtrack will adjust to match. It could also go a long way when it comes to visualizing data, especially when in groups -- instead of virtually constructing profiles of individuals who applied for a slot at MIT, for example, or segments of a business that need to be organized based on different parameters, you could have each assigned to a cube, which can be tossed into an accepted or rejected pile, and repositioned as necessary.

Imagine having a group of display cubes when it comes time to plan the seating chart for a reception -- each cube could represent one individual, with a color-coded background and a name or photo up top, with different descriptive elements on each side. The same could apply to products at monstrous companies like Samsung or Sony, where executives need to make planning decisions based on product performance, and could benefit greatly from having all of the necessary information for a single gadget listed around each cube. On a larger scale, the cubes could be used to replace walls and floors in a building -- want to change the color of your wallpaper? Just push a new image to the display, and dedicate a portion of the wall for watching television, or displaying artwork. You could accomplish this with networked single-sided panels as well, but that wouldn't be nearly as much fun. The Media Lab had a working prototype on display today, which demonstrated the size and basic functionality, but didn't have an adjustable picture. Still, it's easy to imagine the potential of such a device, if, of course, it ever becomes a reality. As always, you'll find our hands-on demo just past the break. In this article: cube, cubes, cubic, display, display blocks, display cube, DisplayBlocks, DisplayCube, displays, hands-on, lab, media, media lab, MediaLab, mit, mit media lab, MitMediaLab, oled, oled display, OledDisplay, panel, panels, video
All products recommended by Engadget are selected by our editorial team, independent of our parent company. Some of our stories include affiliate links. If you buy something through one of these links, we may earn an affiliate commission.
Share
Tweet
Share