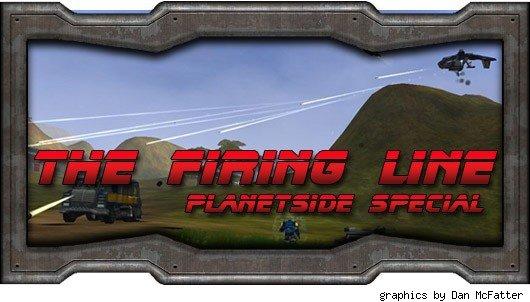 So PlanetSide is nine years old this week (nine!), and Sony Online Entertainment is journeying down memory lane to look back at its ground-breaking MMOFPS. The firm is of course hard at work on the sequel, but some of the devs have taken a time-out to share their favorite memories with us.

Though the word "epic" is overused in MMO discourse, it's a recurring theme here. Due to the size, scope, and sheer ambition on display in the original PlanetSide, it's actually appropriate too. While you're reminiscing with the devs, take a stroll through our side-by-side gallery that compares vehicles and equipment from the original PlanetSide with their counterparts in PlanetSide 2.

What are your favorite PlanetSide memories?

Christine "Cookie" Kish: On opening day just hours after the servers opened, Xolia and I were on the outside walkway of a base's top level. We would set up a boomer in front of a door and the other would stand in front of the window next to it.

When we would see the opposite team through the glass we would spam the "help" voice command drawing attention to ourselves. First the enemy NC would try to shoot us through the glass, which was not breakable (we knew that), so they would charge for the door.

When the door opened you would hear a beep of the detonator then BOOM, dead NC. Let the door shut, reset the Boomer, and wait for the next victim, rinse repeat. We kept that up for a good 45 minutes until someone finally realized that they could just use the stairs outside to kill us. Great laughs even after we died.

Margaret "MaggieAnne" Krohn: Going into the enemy's command center, finding myself in the midst of five enemies and knifing each of them, then winning the fight and re-securing the base!

Andrew "rogue13" Risch: A tank had rolled into my tech plant and blasted away the folks in the courtyard. The driver popped out and started to run for the front door. I leveled my rifled at him and pow - headshot. I smiled when I saw the name of who I had just killed. It was Smed (SOE CEO John Smedley).

Me and one other guy defending a base for 30 minutes in the middle of the night against over 20 Vanu who got increasingly frustrated. Freaking Alamo stuff. TR forever!

The first time I watched the Sturmgrenadiers put together a true combined arms mass assault on a base with coordinated pincer movements, heavy armor columns, and calculated air attack waves. Just amazing.

We were getting ready to launch Aftershock. The Auraxis construct was prepping to twist itself into subspace tunnels, pushing the continents across the cosmos to different planets, yet leaving them connected.

It was cool and the players didn't know what was coming. But we foreshadowed the planetary reconfigure by triggering earthquakes and dropping asteroids on the planet, manually. At first, we didn't have any automated way to do the barrages and every day, at random parts of the day, I would search the world for combat hot spots and then manually trigger barrages of space rocks and increasingly large earthquakes, unleashing my little slice of randomness on the
unsuspecting players.

At first, the players didn't believe each other when they said they saw meteors dropping. Then everyone felt the quakes and more people started seeing bigger and bigger barrages. The forums and chats were epic as players tried to figure out what was happening. All they knew was that the expansion was called Aftershock, so they didn't know what to expect. It was fun.

Thom Terrazas: I had just joined the PlanetSide team around 2006 or 2007. There was a Fan Faire that was coming up very quickly and we were looking to do something special with our PlanetSide attendees. Someone suggested laser tag and we were all up for it.

A bus picked us up from the hotel and drove us out to the laser tag "building", allowing us to swap stories and lies to and from. We played about five rounds of laser tag with the players and friends of PlanetSide, sweating all over the place. I never had more fun at a Fan Faire event than that one. I got handed over a t-shirt from the Black Widow Company Outfit and a black eye from an overzealous fan. I think he was out of ammo and was trying to stab me.

Tramell Isaac: My epic moment -- the very first time we got 200 people playing PlanetSide for an hour was the day the whole team realized that we had something special. It was like giving birth to your first CG child. We had a crap-ton of fun that day and we all couldn't wait to get in to do it again. It was THE most epic moment in my career. We had done the impossible.

Brian Burness: My most epic moment in PlanetSide was also one of my first memories of the game, I was zerging as an infantry on one of the forest continents, Amerish I think. I walked up a hill overlooking a moderate sized valley and what I saw could only be described as epic; there was what seemed like hundreds of players in all-out warfare. Tanks on either side firing at each other across the valley while buggies and ATVs rushed toward the center weaving in and out of weapons fire.

Aircraft would scream across the sky strafing any targets they could. Then there was the infantry between all this, fighting to push the line forward. It was at that moment standing there on that hill that all of the bugs and network issues that the game had at the time become overshadowed by the awe-inspiring scale of the game, I was sold and have been playing ever since.

One of my favorite in-game quotes: "Dude, go around the Tulip... Yes, I said Tulip."

Mark Storer: I remember our tank squad filling the air with 150mm shells raining down on a base before we breached the courtyard and pinned the enemy inside. I remember a column of Magriders smashing into one flank of a bridge battle stalemate and rolling the enemy up like a map. I remember taking part in a VS Max Crash as we jumped over the base wall and filled the courtyard with MechaBarnies. I remember glory!

The Firing Line's Jef Reahard has a twitchy trigger finger, a love of online shooters, and an uncanny resemblance to Malcolm Reynolds. OK, maybe not, but at least if he ever kills you, you'll be awake, you'll be facing him, and you'll be armed.
In this article: andrew-risch, classic-mmo, dave-georgeson, featured, firing-line, fps, margaret-krohn, mmo-shooter, mmofps, opinion, planetside, planetside-2, planetside-aftershock, planetside-dev-memories, planetside-epic-moments, planetside-memories, ps, ps1, ps2, pvp, sci-fi, shooter, soe, sony, sony-online-entertainment, tfl, the-firing-line, third-person-shooter, thom-terrazas, tps, tramell-isaac
All products recommended by Engadget are selected by our editorial team, independent of our parent company. Some of our stories include affiliate links. If you buy something through one of these links, we may earn an affiliate commission.