The good news continues to roll in for fans of emergent MMOs and the little-indie-sandbox-that-could, otherwise known as Embers of Caerus. Forsaken Studios has released a PR splash noting that it is making use of the Havok Vision Engine to power the forthcoming fantasy epic.

If you've been keeping abreast of this story, you probably know that EoC is riding a wave of positive buzz following on from its successful Kickstarter campaign, which has already met its initial funding goal and then some with 19 days left to go.

Forsaken is now seeking to galvanize additional sandbox fans, a demographic that creative director Rob Steele says is ready for EoC and games like it. "It just shows that the audience is out there, hungry for the kind of game that we're making -- one where the players take control of the world and make it their own," he says.

[Thanks to flintwicktog for the tip!]
In this article: crowd-funding, embers-of-caerus, fantasy, forsaken, forsaken-studios, havok, havok-engine, havok-vision-engine, kickstarter, rob-steele, sandbox
All products recommended by Engadget are selected by our editorial team, independent of our parent company. Some of our stories include affiliate links. If you buy something through one of these links, we may earn an affiliate commission. 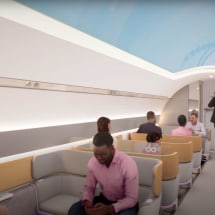