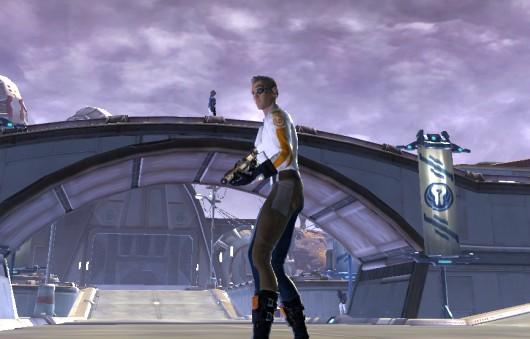 When I play an MMO, I tend to play solo. This isn't because I outright dislike grouping -- I've said exactly the opposite before -- but when given the choice, I'll default to solo. I don't always have a reliable play schedule, I like having the freedom to start and stop projects at my whim, and most importantly, I like the option of just tuning out a bit and losing myself in a solitary romp every now and again.

Some people get very bothered by this, though, and they really dislike the fact that there are solo players asking for more solo content. Sometimes it's rooted in a fear that solo content will interfere with group content, and sometimes it's because of the fear that no one will group if there's plenty to do solo, but the same argument gets brought up every time: "If you want to play solo, you should be playing a single-player game."

Except they're not the same thing. Not by far. There are distinct benefits to playing in an MMO even if you prefer doing most content solo instead of in a group.

When you finish a single-player game, it's done. There are a lot of games that offer you the opportunity to screw around after the fact, of course, but that doesn't mean there's actually any more game. And when a new game comes around, your effort in working your way through a previous game is essentially a non-issue. Final Fantasy XIII is not going to become cake just because I played the heck out of Final Fantasy XII; they're two different games.

In an MMO, on the other hand... there's new content on more regular basis, and there are a lot of adventures to be had on a regular basis even after you've reached the level cap. All of your work leveling and powering up is still relevant when you have to work through new content. Unlike in most single-player games, you can really make a legacy for your character in MMOs, and you have a certain sense of persistent accomplishment as you achieve new goals.

A single-player game is by its very nature static. When I'm playing my way through a given bit of content, I'm going to be the only person there every time. Even games like Diablo III that offer a system for players to drop in don't allow them to just be at work clearing a region when I suddenly stumble across them.

On the other hand, if I'm questing through an area in an MMO, I might be the only person there. I might run into someone else, or several someones. I might have a friend stuck in an area who needs help to get back out safely. Even the most instance-heavy games on the market give players several chances to interact with one another via cities and chat modes that keep everyone in a common region with shared goals.

That's disregarding the moments that players can become antagonists, as well. I'm not fond of open PvP as a rule, but there are many times when the threat can force players to act differently. You can find yourself as a high-level player suddenly given the opportunity to attack or spare someone lower-level, and it can spice up an otherwise standard run from one area to another. And that's the case whether you're solo or surrounded by others.

Even if you don't like grouping up for content, you can still want to play in a group. Roleplaying, for instance, requires another person to interact with. There are games that facilitate a certain amount of storytelling, like The Sims or most BioWare titles, but in order to really throw open the doors and be what you wish you need more players. Maybe you prefer playing solo, but if you want to interact with others you need, well, others.

It's not the only social interaction available, however. For some people, playing an MMO is a way to keep in touch with friends who might be doing totally different things, or a way to get the fun of crafting and playing merchant. A lot of social interactions in an open game don't require you to enter a party and go kill things.

Playing solo isn't always an easy ride. For some players, that's part of the point.

Guild Wars offers the option to solo pretty much every bit of content with the aid of AI-controlled henchmen, but those henchmen frequently aren't very bright. It's a lot easier to go in with fully geared heroes, but it's even easier to actually have friends with you who can clear the content with skill and brains. The thing is, though, that some people actively prefer the challenge that comes with trying to do something solo that ought to require a full team.

Back when I was first playing World of Warcraft, one of my great joys as a Paladin was finding ways to solo quests that should have required a full group. It was slow, it was difficult, and every so often, I had to admit that it just wasn't possible. But it was an added challenge, and it was accomplished without messing around with a difficulty slider. And if I felt like the challenge was too steep, well, then I could just grab a friend to help. It was an option, and it was more fun to know that I could rely on myself at times.

By contrast, in a single-player game, everything is designed for you to beat it while on your own. Even at the higher difficulties, you know that you can beat it if you practice at it. It's not a question of "is this even doable" so much as one of "how do I do this correctly," which is much less engaging for some players.

This is where the game's at

Sometimes, there are games you want to play that just don't exist as a single-player ride. MMOs have some fascinating mechanics, often very unique ones that just don't exist in other games. Even if you don't necessarily care about any of the other reasons on this list, the fact is that there are times when you want a flavor of game that exists only as a multiplayer venture.

So what do you do? You play the MMO. Even if you're not thrilled about the multiplayer aspect, you still play it because this is the game that plays the way you want. And you probably would prefer to solo your way through a lot of it, since it's the mechanics you find the most engaging anyway.

Maybe some of these apply to a given solo player. Maybe only one does. Maybe multiple reasons do. But they're all valid reasons that the player in question is playing solo in an MMO instead of just playing something offline. And there are doubtlessly more besides.

It's not just trying to turn a multiplayer game into a single-player experience because there's a lot that's unique to MMOs, even if you'd rather get a lot of the gameplay done by yourself.

In this article: editorial, featured, multiplayer, op-ed, opinion, players, playing-alone, playstyle, rant, rants, single-player, soapbox, solo, solo-play, solo-players, the-soapbox, working-alone
All products recommended by Engadget are selected by our editorial team, independent of our parent company. Some of our stories include affiliate links. If you buy something through one of these links, we may earn an affiliate commission.