Spotify releases artist-branded apps, Quincy Jones and Rancid pick your music for you 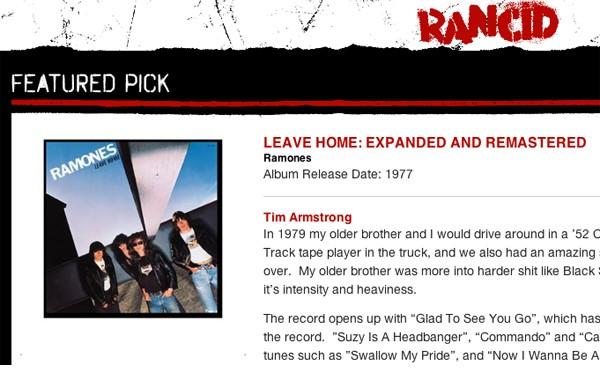 Finding new music can be difficult. And sure, internet radio services like Pandora are all well and good, but can you really trust their algorithms to chose your music for you? What you need is an experienced tastemaker, like Quincy Jones or Tiësto or those dudes in Disturbed, whatever their names are. Thankfully, all of the above and Operation Ivy expats Rancid have signed up to create the first round of Artist Apps for Spotify, which can be downloaded now via the desktop verison's left nav bar.

potify today unveiled four new music apps from Quincy Jones, Tiësto, Rancid and Disturbed that will give users a curated experience through a wide range of music genres. The new Artist Apps categorize and organize Spotify's 16 million* plus tracks and educate music fans on various genres and subgenres.

These are the first in a new series of Artist Apps created for the Spotify platform that enable music fans to have a deeper connection to their favorite artists and music. A number of other artists and music experts will be launching apps in the coming weeks and months, including Steve Aoki, and artists from the worlds of rock, pop, hip-hop, jazz, and R&B.

To celebrate the launch of the apps, Spotify held a cocktail reception in Los Angeles which featured a conversation between the legendary Quincy Jones and Bruno Mars. Quincy brought his Spotify app to life by telling the stories behind his many successes in the music industry.

Commented Jones, "The Spotify Artist App is a wonderful opportunity to share some of the behind the scenes stories of a few of the memorable recordings that I have been fortunate enough to make. I think this App will give entertaining insight and value for these recordings to both music fans and aficionados."

The new Artist Apps are:
QUINCY JONES - THE STORIES BEHIND THE MUSIC - Exclusive audio by Quincy is combined with tailored playlists and incredible artwork to tell the stories behind his amazing career in music. Quincy will talk about his personal heroes and mentors, the art of hit-making, and how music is used in movies; all to a soundtrack that brings these amazing stories to life.

TIЁSTO'S CLUB LIFE-Superstar DJ and producer Tiësto curates the best of dance music across Spotify. The app will include a single of the week, album of the month, festival of the month, and a chart of the hottest dance music.

RANCID-Punk veterans Rancid curate the world of punk and the music it continues to heavily influence. Every week the band and friends will add to a playlist of picks that will include information on the tracks and bios of the pickers. Rancid's Tim Armstrong will use the picks to take fans on a trip to his personal record room to take a deep dive into the music that inspires him.

DISTURBED-The band Disturbed curate the past, present and future of rock and metal music with playlists from each of the band members, special guest playlists and a journey through the last few decades of Rock and Metal.

"Our goal is to partner with artists to create the best possible experience for our users," said D.A. Wallach, Spotify's Artist-in-Residence. "With these new apps we wanted to create a space on Spotify where artists could have 100% creative control – giving the apps their own feel, functionality and direction, and building rich and engaging experiences for their fans."

"Spotify is one of the most exciting platforms out there, helping to redefine the way people listen to music," said Tiësto. "I'm delighted to be part of it, and to give dance music fans a new way to discover artists, albums, festivals, and to share what I'm into."

"I always want to share music with my friends and tell people about artists...both new and old," said Tim Armstrong from Rancid. "Nothing is more gratifying to me than turning people on to music and making it a part of their lives and then, them in turn, turning it onto other people. There is nothing like having music in common. We are truly looking forward to this whole thing."

"This app in Spotify lets us create a really cool and visual place where we can pull together the music that influenced us, the music we're listening to now and the bands that we think everyone will be listening to in the future," said David Draiman from Disturbed. "Combining this app with Spotify's catalog is a great way for us to share all of this with our fans."

Artist Apps are available globally on the desktop client of Spotify on the left hand nav bar. Users can use the App Finder to add apps to their list of favorites.

In this article: disturbed, minipost, music, music streaming, MusicStreaming, quincy jones, QuincyJones, rancid, spotify, tiesto
All products recommended by Engadget are selected by our editorial team, independent of our parent company. Some of our stories include affiliate links. If you buy something through one of these links, we may earn an affiliate commission.
Share
Tweet
Share