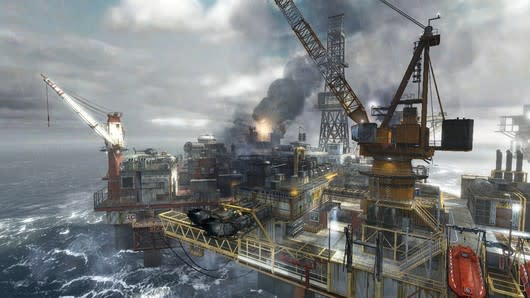 Call of Duty Elite members on Xbox 360 will get a new content drop in Modern Warfare 3 on Tuesday, July 17: three new multiplayer maps and a Spec Ops mission.

The multiplayer maps include a graveyard of derelict ocean liners called Decommission, an oil rig built for sniping called Offshore, and the remake of Modern Warfare 2's Terminal map, available to Elite members on Tuesday and free for the rest of Modern Warfare 3's Xbox 360 players the following day. In the Spec Ops mission, Vertigo, players must take down enemy troops and helicopters while perched atop the Oasis hotel.

On Thursday, July 19, Call of Duty Elite subscribers on PS3 get to tussle with three new Face-Off maps and a Spec Ops mission, content released on Xbox 360 back in June. Multiplayer maps include a tornado-rocked town called Vortex, a dilapidated middle-eastern highway in U-Turn, an urban NYC-based map called Intersection, and the Spec Ops mission, Arctic Recon, which tasks players with assaulting a Russian warship. Modern Warfare 3 is in for one of the most content-rich months yet, as July sees the release of some exciting ELITE drops.

Xbox 360 ELITE Premium members will receive four exclusive drops on Tuesday,17th July, including three Multiplayer maps and a Special Ops mission. Navigate a graveyard of rotting ocean liners in Decommission. Take the fight out on the ocean in Offshore, an oil rig rich with sniper perches. On Special Ops mission Vertigo, dispatch helicopters and enemies alike from a rooftop vantage point on the Oasis hotel.

After weeks of anticipation, Terminal arrives to MW3! A fan-favourite from Modern Warfare 2, this Russian airport map is sure to be a hit with old and new fans alike. For ELITE Premium Members on Xbox 360, Terminal is available to download next Tuesday, 17th July. Non-ELITE Premium members on the Xbox 360 won't need to wait long for their classic map, Terminal releases free to all Xbox 360 players only a day later on Wednesday, 18th July.

PS3 ELITE Premium members will also see four content pieces this month, with three Face Off maps and a Special Ops mission releasing on Thursday, 19th July. Drop into a tornado-devastated farm in Vortex. Weave across a war-torn Middle Eastern highway in U-Turn. And fight across some New York City streets in Intersection. In the Special Ops mission Arctic Recon, go by air, land, and sea to destroy a Russian warship.

MW3 fans are about to see a lot of action in the weeks ahead!
In this article: arctic-recon, Call of Duty, Call of Duty: Modern Warfare 2, Call of Duty: Modern Warfare 3, call-of-duty-elite, call-of-duty-modern-warfare-3, decommission, intersection, microsoft, Middle East, modern-warfare-3, offshore, pc, playstation, ps3, Sci/Tech, spec-ops, Special forces, terminal, U Turn, u-turn, vertigo, vortex, xbox
All products recommended by Engadget are selected by our editorial team, independent of our parent company. Some of our stories include affiliate links. If you buy something through one of these links, we may earn an affiliate commission.